Royal Enfield Shotgun name registered. Here's what it could be

The Shotgun name could be reserved for the upcoming 650 cc bike from Royal Enfield.It is expected to make its public debut later this year.
By : Prashant Singh
| Updated on: 28 Apr 2021, 01:19 PM 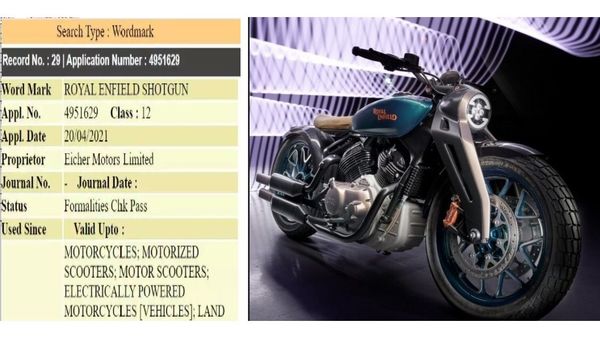 The Shotgun name could be reserved for the upcoming 650 cc bike from Royal Enfield.

Royal Enfield has filed a trademark for the name "Shotgun" for one of its upcoming motorcycles. The patent application was filed last week as per the document and has been allotted for the section of two-wheelers (motorbikes, scooters, etc.)

While there is no clear indication on which bike the name could be used, reports suggest that it could be reserved for the upcoming 650 cc bike from Royal Enfield.

The Chennai-based bike maker has several models in the pipeline for 2021. There is the new-gen Classic 350, a scrambler-oriented bike - Hunter 350, and a big 650 cc twin-cylinder low-slung cruiser that has also been spotted getting tested a number of times in the past.

What looks most likely at the moment is that the name "Shotgun" could be reserved for the upcoming 650 cc parallel-twin cruiser from Royal Enfield, as the name also fits the bike's persona.

If such is the case, the bike will feature the same 650 cc parallel-twin engine from the existing Continental GT 650 and the Interceptor INT 650 motorcycle. It is going to be a direct rival to the likes of the Kawasaki Versys 650 but will be placed much lower - somewhere under the price tag of ₹4 lakh (ex-showroom).

Needless to say, details are yet to be confirmed officially by the company.

It is expected to make its public debut later this year and will go on sale in the Indian market soon after that (late-2021). More details on the same will be confirmed in the time to come.