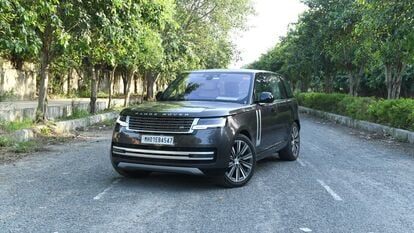 Flagship luxury SUVs across brands have some stellar highlights in terms of dominating road presence, an absolutely opulent cabin, features that cuddle every senses and a drive performance that's usually engineered to bully. But while the latest Range Rover claims to have all of these, it also pays rich tribute to its past with ample cues in the fifth-generation model from erstwhile versions.

The 2022 Range Rover has a mammoth road presence and is the longest SUV on Indian roads at present.

The 2022 Range Rover landed in India earlier this year and it continues to target a very niche set of buyers within an already very exclusive set of flagship SUV buyers. The Range Rover renews its rivalry against the likes of Mercedes-Benz GLS, Audi Q8, BMW X7 and Porsche Cayenne, and these are some extremely worthy champions to lock horns against. But is the newest Range Rover also in a league of its own? Here's a full-drive review of the 2022 Range Rover:

Your chauffer deserves a pay raise! Any SUV in the segment that Range Rover falls in is hardly self-driven and the person behind the wheel has the task of driving a tank that's well over 5,200 meters in length in a battlefields that are Indian cities.

The new Range Rover comes with multiple engine options and an all-electric version is also in the works.

The Range Rover is a mammoth vehicle and while it is kitted with all kinds of assisted driving technologies mated to the 3-litre mild hybrid petrol motor, it sure does take quite some getting used to. The SUV doesn't quite like slow-paced, bumper-to-bumper traffic (frankly, who does anyway?). And it creeps its way forward while sipping generously on fuel - one can almost see the fuel gauge falling with the naked eye. But once the roads open up, the Range Rover silently rumbles forward with superb finesse. The eight-speed auto gearbox ticks the right numbers at the right time and with 400 bhp and 700 Nm of torque at your disposal, the path forward is yours for the taking.

The Range Rover weighs around 2.5 tonne but on the move, its weight is hardly ever felt. It isn't obviously built for sprints but press the throttle and the entire fortress of a frame moves ahead purposefully. Ride comfort - perhaps its biggest test - is plush on well-paved roads but the enormous 22-inch wheels mean that pot holes weren't exactly blown to oblivion as the Range Rover passed over. The air suspensions, however, do try their best.

Of course, this SUV is also a true-blue off-road beast and even though - honest admission here- we did have the guts to test a multi-crore vehicle in uncharted territories on our very own, it does boast of Land Rover’s Terrain Response 2 system, 294 mm of ground clearance and a wading depth capability at 900 mm. For the masses, Mahindra Thar has a water wading capacity of 650 mm.

Flagship SUVs almost always have cabins that are either flashy or stuffed with features. Or both. The 2022 Range Rover does have a mile-long list of features but its cabin is anything but flashy. Instead, it is deliberately understated in its LWB (long wheelbase) version.

A look at the palatial cabin inside 2022 Range Rover SUV. (HT Auto)

Physical buttons are nearly extinct inside and almost every minute functionality can be operated through a tablet that is integrated into the foldable central armrest. This includes controls for back angle, expandable foot rest, the window shades, sunroof, ambient lights, heating and massage, and more. And if that's still not enough to impress, there are two 11.4-inch screens on the back of the front seats which come with headphones each.

The 2022 Range Rover offers a throne-like feel in the second row. (HT Auto)

The rear-left passenger seat is the place to unwind in for sure but even if you are made to sit in the front, there's much to be impressed with. A 13.1-inch infotainment screen, a 13.7-inch driver display and a 35-speaker Meridian system are all tailor-made to elevate the experience of the drive itself. And once it is time to take a break, open the trunk door for a fold-out section where you can park yourself for a picnic. Climbing in though can be a challenge from any of the five doors of the vehicle and although the car lowers itself for entry, it still may be a slight challenge for many. Also, and for anyone asking, this is a five-seater SUV.

The Range Rover is likely to occupy space of at least two ‘conventional’ cars. At least. But while it has huge proportions from the outside, it is a gentle giant to look at. Much like how the cabin is carefully understated, the exterior design language is captivatingly minimalist.

A look at the rear and side profile of the newest Range Rover. (HT Auto)

Whether it is the vertical strip LED tail-lights, flush door handles, the assimilated fog lights on the bumper - the 2022 Range Rover lets its visual aura do the talking. The similarities between this and the first-gen Range Rover are uncanny but it is indeed remarkable how the designers have ensured a beautiful confluence of modernity with tradition in the vehicle's overall design language.

The latest Range Rover starts at around ₹2.4 crore and the model in this review is at ₹3.50 crore (ex-showroom). Now that's some serious money for an SUV that's seriously big, seriously capable and seriously opulent.

In a market that is dominated by the German brands, Range Rover continues to target the power players who appreciate the finer points rather than the flashier bits. The Range Rover than offers that perfect exclusivity factor that is at ease and in command wherever it goes.

Arctic cold is no sweat for electric cars in Norway. Here is why

Over nine lakh government vehicles to retire from Indian roads. Here is why

Budget 2023: What it brings for Indian auto industry

KTM 390 Adventure gets ready to take on tough roads

5 Questions to ask yourself before buying Car Insurance

Royal Enfield Scram 411 is the more affordable version of Himalayan

Aprilia India confirms KTM RC 390 rival for this year, could be called RS440