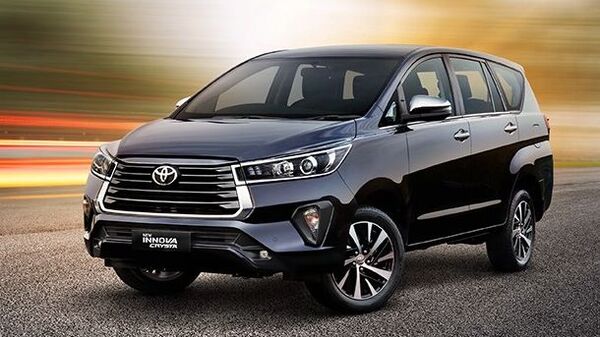 Toyota Motor has announced that it has sold over 10 lakh Innova MPV so far in India.

Toyota Kirloskar Motor has hit a major sales milestone with the Innova, its premium three-row multi-purpose vehicle (MPV) in India. The Japanese carmaker has announced that the Innova MPV has found more than 10 lakh homes so far across the country. Innova, now offered in India as Innova Crysta, is one of the oldest three-row vehicles being offered in the country. It is also one of the highest selling vehicles in its category where it rivals the likes of Maruti Ertiga and XL6, MG Hector Plus, Kia Carens, Renault Triber among others.

Toyota Motor currently offers the Innova Crysta MPV in India in as many as 18 variants. The starting price for this flagship MPV is ₹16.52 lakh and goes up to ₹24.59 lakh (ex-showroom). The MPV is offered in multiple seat choices and can accommodate up to eight occupants.

Toyota Innova Crysta is offered in India with two engine options which include a 2.7-litre petrol and a 2.4-litre diesel units. The petrol engine is capable of generating maximum output of 166 PS and 245 Nm of peak torque. The diesel engine can churn out 150 PS of maximum power and 360 Nm of maximum torque. Both engines come mated to transmission options which include a five-speed and six-speed automatic gearbox.

Toyota Innova Crysta is one of the biggest MPVs in terms of size and space on offer on the inside. The MPV stands Innova Crysta 4,735 mm in length, 1,830 mm in width and 1,795 mm tall. The Innova Crysta has a wheelbase of 2,750 mm.