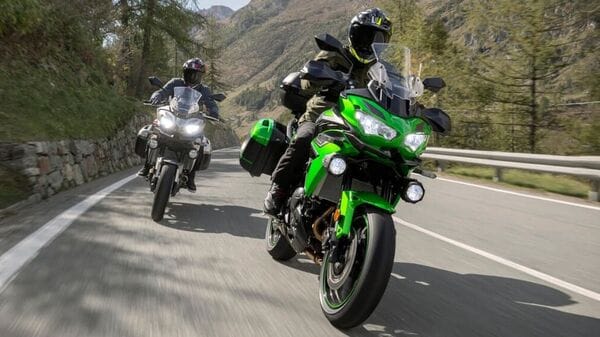 After teasing the motorcycle multiple times over the official social media handles, Kawasaki has finally announced the launch of the new 2022 Versys 650 in the Indian market. The motorcycle has been priced at ₹7,36,000 (ex-showroom Delhi) which is close to ₹21,000 more than the previously sold model.

With the latest 2022 update, the Kawasaki Versys 650 has received a slew of new features which makes it more modern. It now gets a sharper split LED headlight design along with a tweaked adjustable visor that gels better with the overall updated look of the bike. The underbelly pan now sits in a different position which fully exposes the twin exhaust pipes.

In terms of features, the bike has received a new TFT instrument cluster that replaces the previous semi-digital console. The updated setup gets smartphone connectivity via Bluetooth. There is also a USB charging port that allows users to get their smartphone devices charged on the go. In terms of safety, the bike now comes equipped with a two-level traction control system.

At the heart of the bike continues to sit the same 649cc, liquid-cooled, twin-cylinder motor which dishes out 66bhp and 61Nm. The engine continues to come mated to a 6-speed gearbox as before. That said, hardware equipment including the suspension, brakes, and wheels have been retained.

(Also Read: Honda, Suzuki, Yamaha, and Kawasaki to pull the plug on 20 motorcycles this year)

Needless to say, the bike has gone through some major updates for 2022. In the latest iteration, the bike will renew its rivalry with the models such as the Triumph Tiger Sport 660, Honda CB500X and the off-road friendly Suzuki V-Strom 650 XT.