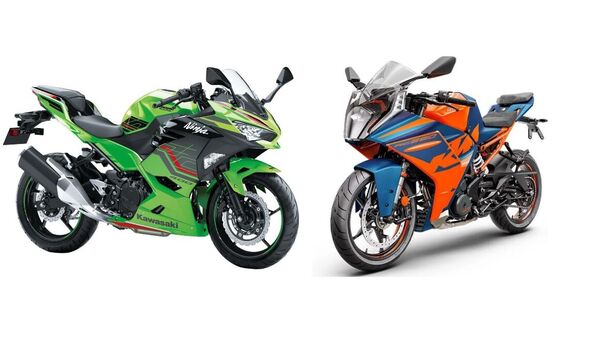 The new Kawasaki Ninja 400 comes out as a much costlier proposition against the KTM RC390 motorcycle.

Only recently, Kawasaki India announced the launch of the newly updated 2022 Ninja 400 motorcycle in the market. The bike renews its rivalry with the KTM RC390 sport bike thanks to updated aesthetics, new features, and a new cleaner engine. Priced at ₹4.99 lakh (ex-showroom), the Ninja 400 comes out as a significantly higher priced offering against its orange counterpart which has been priced at ₹3.14 lakh (ex-showroom). Here's how both the models fair against each other in various other aspects.

(Also Read: Honda, Suzuki, Yamaha, and Kawasaki to pull the plug on 20 motorcycles this year)

On the outside, the new 2022 Ninja 400 was updated with new colour options too. It now comes in Lime Green with Ebony and Metallic Carbon Gray that features Green highlights. And if you recall, the new-gen RC390 was given a much thorough exterior update earlier this year. Its twin-beam headlamps were replaced with a bigger, uni-lamp that reminds of the higher-placed KTM bikes. Needless to point out, both the bikes look apart and fairly premium in their categories.

One of the biggest changes to the new Ninja 400 include the use of a BS 6-compliant 399cc, parallel-twin motor. Previously, the BS 4-spec model was put off sales in the country back in April'20 due to stricter emission norms. In the latest iteration, the bike is rated to deliver 44bhp of maximum power and 37Nm of peak torque. However, in comparison, the RC390 comes with a smaller 373cc, single-cylinder engine which is capable of pushing out 42. 9bhp of power and 37Nm. Needless to point out, both the bikes deliver almost equivalent output, despite the RC390 having a smaller engine. The transmission unit on both bikes remains a six-speed unit.

Some of the key features on the 2022 RC390 include the use of a new TCS (Traction Control System), cornering ABS, a quickshifter, a TFT-display, and multifunction switchgear. While the Kawasaki comes with dual-channel ABS and fully digital screen.