Volkswagen to restart production in its German EV factories: Report

Volkswagen had paused operations in its German EV factories due to the ongoing Russia-Ukraine war.
By : HT Auto Desk
| Updated on: 25 Mar 2022, 11:26 AM 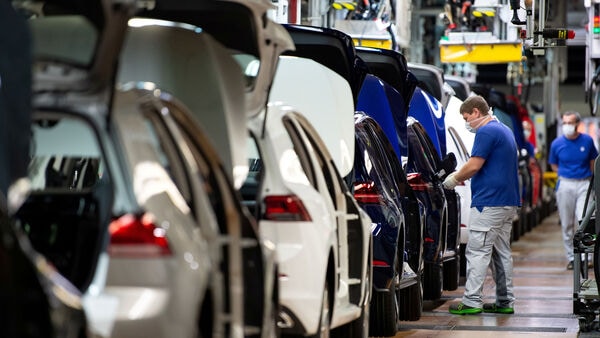 Volkswagen has reportedly announced it will resume manufacturing at its German electric vehicle factories next week. Volkswagen had paused production in its German plants last month, blaming the Russian-Ukraine conflict as the reason for the decision.

Volkswagen CEO Herbert Diess had stated prior to the halt that the company has created a special task force to look into the consequences of the Russian invasion of Ukraine, on the supply chain. Earlier this week, the auto major shared its intention to continue the pause. It was reportedly said the factory located in Zwickau would not start work until April due to a lack of parts. The Dresden factory would also continue to halt work until April, it was reported.

Previously, Diess had stated the global auto industry which is still recovering from the nagging pandemic days and ongoing semiconductor shortage may feel the burn of the Russia-Ukraine war and if the conflict is stretched, the European economies will suffer more. It will take longer to recover from these crises, mentioned the CEO earlier. The blockages in the supply chain because of the war will lead to scarcity of materials leading to an increase in prices.

Earlier this month, Volkswagen had announced its decision to suspend its operation in Russia. Many automakers such as Honda, Hyundai, Volvo, Porsche, General Motors, Ford and Harley-Davidson declared to pause their operations in Russia after its Ukraine invasion.

Volkswagen's Zwickau plant manufactures some of the auto company's significant EV models such as Audi Q4 e-tron, Cupra Born, ID.3, ID.4 and ID.5 EVs. The ID.3 electric vehicle is also produced at the Dresden factory. The company also added production at its plant in Bratislava, Slovakia, has resumed this week. This factory was also shut down due to issues with supply chain logistics.