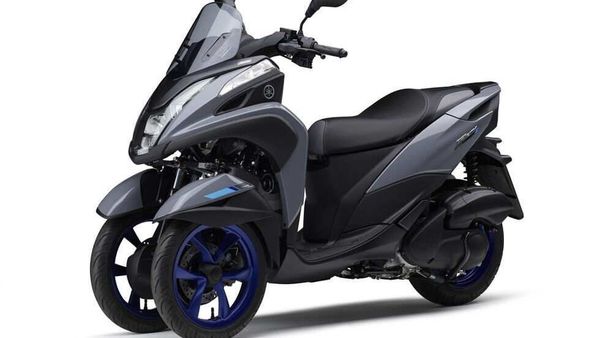 The scooter was first revealed to the world at the 2019 Tokyo Motor Show. It has been slated to go on-sale in its home country on May 15th.

In order to provide the new MY20 a refreshed look, the scooter has been given a Blue-ish Grey Solid colour scheme. Rest, most of the details remain unaltered and the updated model is identical to the previous unit.

As a part of the newly added paint scheme, the 155 cc trike scooter gets blue alloy wheels, blue stitching on the seat, and a slightly different tail cowl stickers. Besides that, the company has also given a set of refreshed decals at the front fender as well. What's to be noted is that all these revisions remain limited only to the newly introduced paint scheme.

Some of its key features include LED headlight, LED position lamp, LED taillight, a fully-digital instrument cluster which comes with an Eco lamp, large under-seat storage (23.5-litre) with LED lighting as well as a 12V socket. Its large-sized digital instrument panel displays all the necessary information including current speed, clock, fuel-level, ODO, as well as ambient temp.

As for the mechanicals, it runs on a 155 cc, liquid-cooled, SOHC, four-valve engine which comes loaded with fuel injection technology. On the top of it, there is also Yamaha’s Variable Value Actuation (VVA) tech which aids in enhanced top-end performance. The engine is rated to deliver 14.7 PS at 8,000 rpm and 14 Nm of peak torque at 6,000 rpm.

The company plans to sell 1,200 units of the Tricity 155 in its home market annually.