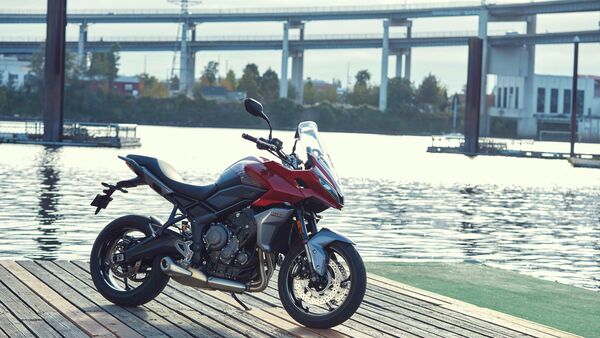 Triumph Motorcycles India is gearing up for the launch of its much awaited Tiger Sport 660 ADV in the country. The new bike was listed on the Indian website a few weeks back and the company has also started bookings for the new model online at a token amount of ₹50,000. Soon after the launch today, the company plans to start the deliveries of the bike in the next few days.

The Tiger Sport 660 made its global debut in October last year. Some of the key features of the motorcycle include LED headlights, Bluetooth-ready TFT instrument console, two riding modes - Road and Rain, a switchable traction control and ABS.

Based on the affordable Trident 660, the Tiger Sport 660 uses the same main frame, as well as engine and platform. However, the rear subframe is updated for the bike's additional load that it is designed to carry as an adventure tourer.

At the heart of the bike sits the same 660cc three-cylinder engine found on the Trident. It has been rated to deliver the same 81 bhp of power and 64Nm of torque. And the transmission includes a six-speed gearbox and an optional up/down quickshifter.

It is likely to be introduced in India in internationally available three colour choices - Lucerne Blue and Sapphire Black, Korosi Red and Graphite, and a minimalist Graphite and Black option.

The suspension duties on the bike will be handled by non-adjustable 41mm USD fork and a pre-load adjustable shock with a remote preload adjuster. It can also accommodate 17-litre of fuel which is three-litre more than the Trident model.

The Triumph Tiger Sport 660 will rival the likes of Kawasaki Versys 650 and Suzuki V-Storm 650 XT. It is expected to cost somewhere in the range of ₹8.50 lakh to ₹9 lakh (ex-showroom).