Hyundai Alcazar three-row SUV is all set to launch in India today.Alcazar from Hyundai will compete with rivals like Tata Safari and MG Hector Plus.
By : HT Auto Desk
| Updated on: 17 Jun 2021, 03:53 PM 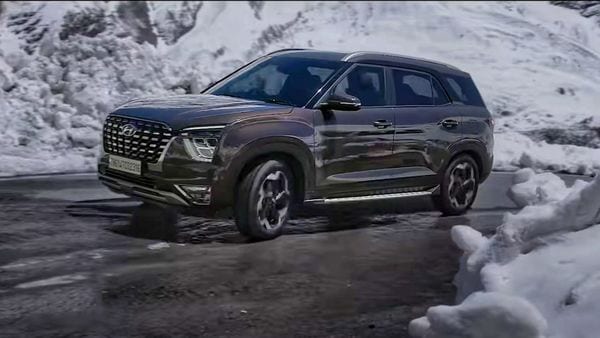 Hyundai Alcazar SUV will launch in India in six- and seven-seater options, offering both petrol and diesel engines mated to either 6-speed manual or automatic gearboxes.

Hyundai Alcazar SUV is all set to be launched today as the Korean carmaker's first three-row offering for its Indian customers. It is likely that Hyundai will start the pricing of Alcazar SUV at around ₹13 lakh and it may go up to ₹20 lakh for the top-spec trim, although sources tell HT Auto that the price band could be between ₹15 lakh and a little over ₹20 lakh (all prices are ex-showroom).

The Alcazar SUV is a new model from Hyundai which aims to target the premium six- and seven-seater segment in India, where it will test the popularity of Tata Safari, MG Hector Plus or even the Toyota Innova Crysta.

Hyundai will offer the Alcazar SUV in three trims - Prestige, Platinum and Signature - the first one being the base trim. Offered in both petrol and diesel, each segment will have options to pick between a six-seater and seven-seater version with further option to choose from a 6-speed manual or a 6-speed automatic gearbox.

Going by their popularity charts, ToyotaInnova Crysta, which was redesigned on the basis of the old Innova, remains on top among the existing three-row premium SUVs. In April, Toyota sold around 3,600 units of Innova Crysta, which is much higher than Tata Safari or MG Hector Plus in the same month. Tata Safari, the newest entrant amongst the three existing three-row SUVs, was launched earlier this year.

It is expected that Hyundai will aim to price the Alcazar SUV aggressively to target a large chunk of the three-row SUV pie. For Hyundai, it is also about getting ready for new challenges in the segment, like the upcoming redesigned Mahindra XUV500, later this year.