It has been a busy, busy past few weeks in the Indian automotive industry with a number of high-profile unveils and launches cutting across car segments. We present a quickfire pros and cons of each of these models.
By : Shubhodeep Chakravarty
| Updated on: 10 May 2022, 10:53 AM 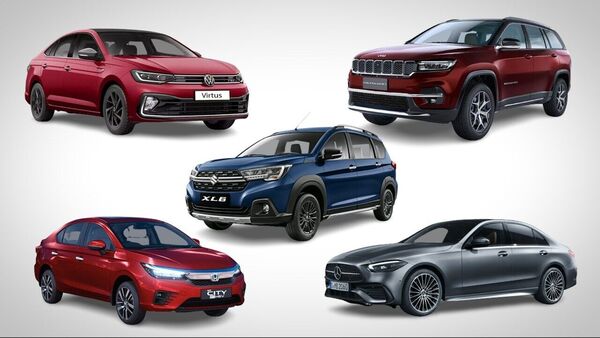 From new to facelift models, the Indian car market has several options for buyers.

The Indian automotive industry witnessed a flurry of unveils and launches over the past few weeks with a number of cars - some absolutely new while others getting significant updates - being launched here. While challenges like rising input costs, chip shortage and the persisting uncertainty from the pandemic remain, there is no shortage of excitement if you are in the market for a new car.

While the MPV segment saw the launch of the 2022 Maruti Suzuki XL6, there was some sure-footed steps taken by Honda with the launch of the City Hybrid. Jeep too made some pretty imposing moves with its Meridian SUV that is based on the Compass but will rival Fortuner from Toyota. Then there are sedans across segments looking at racing forward. The Volkswagen Virtus is a bold step in the mid-size sedan space while the 2022 Mercedes-Benz C-Class is raring to once again lead the pack among its rivals in the luxury space.

Here is presenting a quickfire analysis of each of these models to tell you if any of these deserve a place in your garage and in your heart:

The XL6 has been a power player for Maruti Suzuki in the MPV segment since it was first launched in 2019. While it may be a premium version of Ertiga, it has a whole lot of panache of its own. The latest XL6 has minor styling updates but very sure-footed feature updates. The six-speed AT with paddle shifters is one to watch out for.

The XL6 continues to be a spacious vehicle in all its three rows and feature additions like paddle shifters, 360-degree camera view and an updated infotainment screen are noteworthy. But the vehicle is now also more expensive with the top-end Alpha+ in Dual Tone and with automatic transmission now at ₹14.55 lakh (ex showroom). The updates to the exterior styling are also way too subtle.

Full marks to Honda Cars India for being brave enough to drive in the City sedan with eHEV or full hybrid technology. The City currently dominates the mid-size sedan space even if the segment is shrinking. Honda is betting big on rising fuel prices to help prospective customers move towards hybrid options. In that sense, the City eHEV offers a claimed mileage of 26.5 kmpl.

With subtle but sporty visual updates on the outside and the debut of Honda SENSING safety systems, the City Hybrid is putting on a rather formidable face. The sedan also drives far better than the conventional City. On the flipside though, it is a substantially expensive product at ₹19.50 lakh (ex showroom) and meant only for those who have long daily commutes. Additionally, the boot space has also come down to accommodate the hybrid system so be sure to closely consider this factor.

Jeep isn't one of the most busy players in the Indian car market but when it does enter the playfield, expect some very strong intent. And that is exactly what the Meridian SUV is, a strong show of intent that a Jeep SUV can be luxurious form the inside but every bit as capable as any other Jeep. While the Meridian is largely seen as a three-row version of Compass, it is definitely more plush from within while offering a more composed ride.

The Meridian is a mean machine off the tarmac with some very serious off-road capabilities. On the flipside, it is only offered with a diesel engine and there's no petrol. Also, the third-row seats are far less than ideal in terms of comfort and space.

Price launch of the Meridian is awaited.

On the lines of its cousin - Skoda Slavia, the Virtus from Volkswagen is looking at reviving the mid-size sedan space in the country. And it sure has the credentials to do just that.

To be offered with two petrol engine options and multiple transmission choices, the Virtus is also quite a looker from the outside. But much of its fate would depend also on the pricing structure.

The more capable 1.5-litre petrol unit with the DSG unit is an absolute delight but even the turbo 1.0-litre with AT is quite impressive. On the flipside, the cabin has plenty of hard plastics and the inserts on the dashboard can appear tacky.

The C-Class has long been the entry model for customers into the world of Mercedes but this time, it is aiming to be the rightful younger sibling of the range-topping S-Class. With petrol and diesel engine options, the 2022 C-Class gets some very significant styling updates on the outside and a feature-loaded cabin to particularly interest the younger audience.

The new C-Class is sportier to look, sportier to drive and has a very premium cabin. On the flipside, rear-seat comfort and space is limited while the low ground clearence can be an issue on Indian roads.

The C-Class will launch in India today.