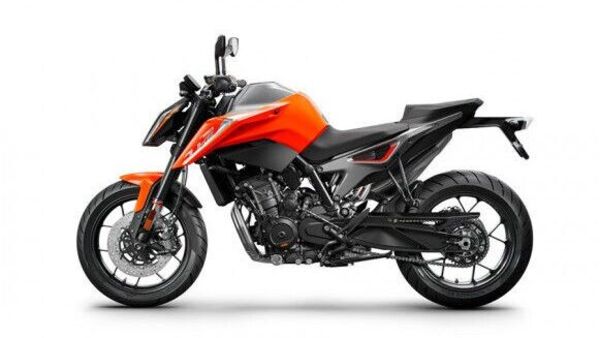 KTM has re-introduced the 790 Duke in the international markets. The company believes that the original 790 Duke is significant enough to have a market of its own. Previously, the bike was also made available to the buyers in India, however, it was taken down as the stringent emission norms kicked in.

The 790 Duke is positioned between the 390 Duke and the 890 Duke. It is aimed at the motorcycle riders seeking an option in the middleweight category. With the latest 2022 iteration the bike remains more or less the same as found previously. At the heart of the bike remains the same LC8c parallel-twin engine generating 105bhp and 87Nm. This engine is now Euro5-compliant which also makes it eligible to be sold in the Indian market too. Once in the international showrooms this June. The motorcycle will be made available in a 95bhp version allowing for A2 configuration.

For suspension duties, the motorcycle also continues along with the non-adjustable WP APEX suspension at either end. The bike also carries forward its huge electronic package that consists of features such as cornering traction control, three standard ride modes, cornering ABS with supermoto mode, colour five-inch TFT display, and more. Bits such as up and down quickshifter, motor slip regulation, Track mode, cruise control, TPMS, and phone and music connectivity, are now offered as optional.

There is no confirmation if it will arrive in the Indian market anytime soon. However, chances of it being launched back in India can't be ignored.

Meanwhile, KTM India is gearing up for the launch of the bikes such as the new 390 Adventure and RC 390 in the country soon.