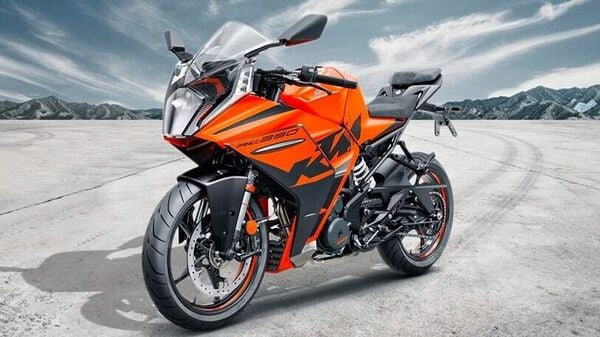 Bajaj Auto has listed the RC390 motorcycle with updated specifications and features that the India-bound model is set to receive.

The new-gen KTM RC390 motorcycle has been officially listed on the company's website indicating an imminent launch. The bike is set to enter the new generation this year and it has already made its global debut last year.

Bajaj Auto has listed the motorcycle with updated specifications and features that the India-bound model is set to receive. The bike, as previously speculated, will sport all the new features found on the global model. This includes new TCS (Traction Control System), cornering ABS, a quickshifter, a TFT-display, and multifunction switchgear also found on the new 390 Adventure and 390 Duke.

In terms of mechanical updates, the sportbike will continue to retain its BS6-compliant 373cc, single-cylinder, liquid-cooled engine as found on the existing model. This engine would come equipped with a six-speed gearbox and would churn out 42.9bhp of maximum power at 9,000rpm and 37Nm of peak torque at 7,000rpm.

On the styling front, the bike will be carry forward some notable updates including the single-pod headlight as well as fairing-mounted rear-view mirrors found on the international-spec 2022 RC 390. Apart from this, it will also sport an updated turn indicator setup, new and sharper fairing design, a 13.7-litre fuel tank along with a redesigned tail section, as well as a side-slung exhaust.

As far as pricing is concerned, the bike is likely to be priced somewhere in the range of ₹2.75 lakh to ₹2.80 lakh (ex-showroom). The launch of the motorcycle is most likely to take place sometime later this month. When launched, it will continue to rival the likes of the Kawasaki Ninja 300 and the TVS Apache RR310 BS 6 bikes.