Tesla increased the price of its Model 3 EV base trim in Germany by 17 per cent.Last month, Tesla hiked the prices of long-range and high-performance trims of the Model 3 electric vehicle.
By : HT Auto Desk
| Updated on: 05 Apr 2022, 02:58 PM 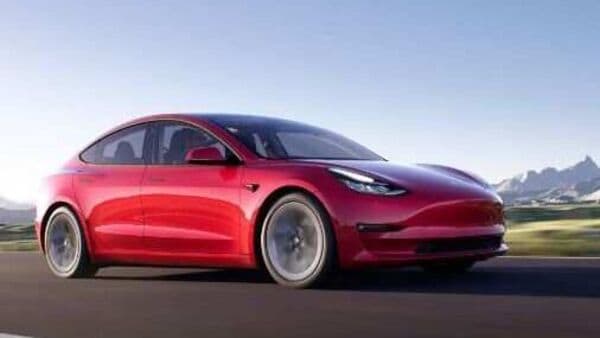 Tesla has increased the price of its base Model 3 electric vehicle by 7,000 euros which is a 17 per cent hike in Germany. The price of the Tesla Model 3 now stands at 49,990 euros which is approximately ₹41.35 lakhs. Last month, Tesla increased the cost of the long-range and high-performance trims of the Model 3 electric vehicle.

This price increase makes the Tesla Model 3 base trim a luxury car now in Germany which also makes it ineligible for the highest government electric car subsidy pushing its cost further. The country provides an environmental bonus of 9,000 euros where the  6,000 euros is contributed by the state and 3,000 euros is given by the manufacturer.

However, it recently introduced a new law that reduces the rebate to 5,000 euros for any car priced between the 40,000 euros to 65,000 euros range, with brings the manufacturer's contribution to 2,500 euros. The EV company has not revealed the reason behind the hike, however, it is being suggested that the rising cost of raw materials like nickel is making the manufacturing process an expensive affair.

The Tesla Model 3 is quite in demand in Germany and it is also the most frequently registered EV in the country. Earlier this year, it was reported that Tesla sold 1,41, 429 Model 3 electric cars in Europe making it the only EV to climb the top 50 bestselling models.

Tesla recently reported the sales results of its first quarter of 2022 where it delivered 3,10,048 electric vehicles. The company though mentioned its falling production numbers due to supply chain disruptions. Tesla also has suspended its operation in its Shanghai gigafactory due to surging Covid-19 cases.