Elon Musk says he is open to having a conversation about Tesla merging with a rival car maker.Tesla has an 18% share in the global EV market, far ahead of its next rival - Volkswagen.
By : HT Auto Desk
| Updated on: 04 Dec 2020, 08:19 AM 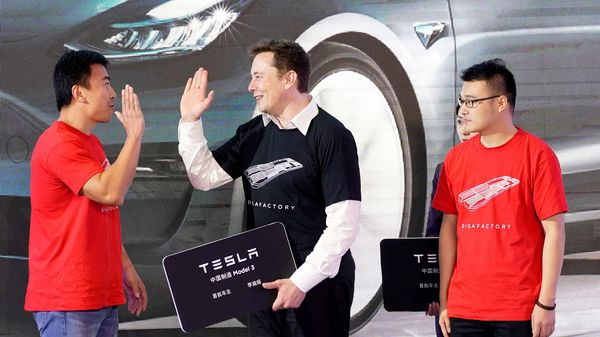 Tesla is leading the charge, and literally at that, in the world of electric mobility. Such has been the dominant performance - and meteoric rise - of Tesla in recent times that CEO Elon Musk has now become the world's second richest man. And yet, concerns over profitability remains clear and present. This may be a reason why Musk recently said that he is not obtuse to the idea of Tesla merging with a rival automaker even if it won't indulge in any hostile takeover moves.

According to Reuters, Musk has said that a merger with another car maker is possible if the situation so arises. Speaking at an Axel Springer event in the German capital of Berlin, Tesla CEO expressed his views on such a possibility in no uncertain ways. "We are definitely not going to launch a hostile takeover. If somebody said it would be a good idea to merge with Tesla, we would have this conversation," he was quoted as saying.

Speculations suggest that Musk's views on a merge - if and when such a possibility arises - may stem from the fact that he is looking at cost cutting and increased production to increase profit margins at Tesla. He had recently written an email to employees asking them to be mindful such that there is no reversal in Tesla's soaring stock prices. "When looking at our actual profitability, it is very low at around 1% for the past year. Investors are giving us a lot of credit for future profitability, but if, at any point, they conclude that’s not going to happen, our stock will immediately get crushed like a souffle under a sledgehammer!" the email reportedly read. (Read more here)

At a time when competitors - even traditional giants like Volkswagen and Mercedes - are aiming to mount a challenge to Tesla, Musk appears doggedly determined to not just retain the EV crown but to also put an increased focus on profitability as well as expanding post-sales network.

Tesla currently has an 18% market share in the EV space globally. This is far more than Volkswagen, the car maker with the next largest share. And while rivals are looking at offering more and more electric products - PHEVs or full battery, Tesla is now also looking at coming out with more affordable products as well as expanding to newer markets.