In June, after a lengthy delay, Pakistan's ambitious electric vehicle policy was approved for implementation.
By : HT Auto Desk
| Updated on: 04 Aug 2020, 16:11 PM 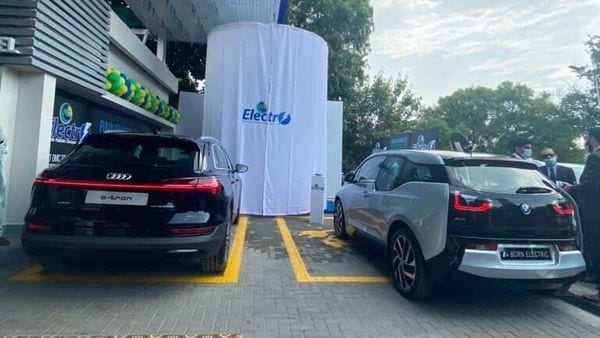 A BMW I3 and an Audi E-tron being charged at PSO Electro Charging Station. (Photo courtesy: Twitter/@PSOPakistan)

The Pakistan State Oil issued a press statement saying that the first charging stations for electric vehicles called "PSO Electro" have been installed at Capri Gas Station in F-7 area of ​​Islamabad on July 29.

"This is yet another step as part of PSO's ongoing efforts in environmental stewardship. Under the guidance and support of GOP, we will continue to drive the future of e-mobility in Pakistan by installing more Electric Vehicle Chargers at various highways and in major cities across the country. PSO is investing in cleaner energy solutions to reduce the carbon footprint and build a better environment for our future generations. As we lead the sustainable energy revolution, our next step is the introduction of Euro-5 standard fuels at PSO retail outlets," said Syed Muhammad Taha, MD and CEO of PSO.

In June, after a lengthy delay, Pakistan's ambitious electric vehicle (EV) policy was approved for implementation. Passed on June 10, the new policy was originally approved by Prime Minister Imran Khan in November, with the goal of cutting air pollution and curbing climate change.

It aims to bring half a million electric motorcycles and rickshaws, along with more than 100,000 electric cars, buses and trucks, into the transportation system over the next five years.

Pakistan’s Minister for Power and Petroleum Omar Ayub and Special Assistant to the Prime Minister Nadeem Babar attended the inauguration ceremony of the charging station.

In his address, the Federal Minister said, "We need to address the key challenges of environment protection. Electric vehicles will have a marked edge as they produce almost no running emissions". Highlighting the Government's efforts in promoting this sustainable form of transportation, he further added "EV manufacturing units will be established across the country under the National Electric Vehicle Policy that will create job opportunities and have a positive economic impact".

Special Assistant to Pakistan’s Prime Minister for Petroleum Nadeem Babar said, "Pakistan is moving forward with the aim of reducing air pollution and curbing climate change. We intend to move to 30% of Renewable Energy in our Energy Mix, together with another 30% of Hydel Power Generation. These efforts coupled with a move towards Electric Vehicles will greatly help in achieving the mission of the Prime Minister of Pakistan of a Clean & Green Pakistan. The Government is supporting all stakeholders involved as the world adapts to this eco-friendly technology".