BMW has developed a new V8 petrol engine for the upcoming XM high-performance car that has been incorporated with the electric drive system.
By : HT Auto Desk
| Updated on: 17 May 2022, 06:39 AM 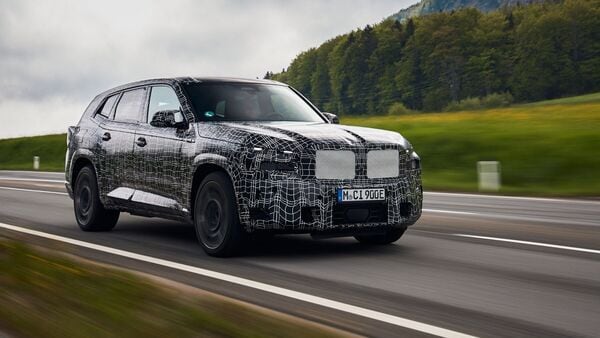 The BMW XM coming from the BMW M GmbH segment as the first high-performance car with an electrified drive has entered the final phase of its series production. Still hidden under the camouflage, BMW XM promises high performance and luxury. The all-new BMW XM is the first M model from the premium automaker that will feature a hybrid drive system. The carmaker shared that this set-up mated with a newly developed V8 petrol engine will give the car's user a dynamic drive experience.

BMW has developed a new V8 petrol engine for the upcoming BMW XM high-performance car that has been incorporated with the electric drive system. This entire system produces a massive power output of 650 hp with a combined torque of 800 Nm. The power from the engine is effectively transferred to the road via the first hybrid-specific M xDrive four-wheel-drive system which according to the Bavarian automaker is very spontaneous. The car offers an electric range of around 80 km. BMW plans to introduce this model at the 50th anniversary of BMW M GmbH. By December 2022, the series production of the BMW XM will start at the US BMW Group Spartanburg factory.

The all-new BMW XM has been designed as a pure BMW M model as it sports a 50: 50 axle-load distribution along with suspension technology. The car is equipped with an Adaptive M Professional suspension as standard. This suspension system also includes a model-specific version of the springs and the electronically controlled shock absorbers as well as an electromechanical roll stabilising system with 48-volt technology which is a first in a BMW M vehicle.

Chairman of the Board of Management of BMW M GmbH Franciscus van Meel shared by introducing the BMW XM at the end of the anniversary year, the brand looking to push the BMW M to break conventional boundaries. “Electrification gives us new opportunities to demonstrate that unmistakable M feeling in a fascinating way and transfer it to the road. Regardless of their drive technology, our performance and high-performance cars will continue to possess an unmistakable and authentic M character in the future," added Meel.