The all-electric BMW iX1 is the brand’s third SUV that will feature a fully electric drive system and this model will be added to the lineup immediately after the launch of the BMW X1.
By : HT Auto Desk
| Updated on: 11 May 2022, 06:42 AM 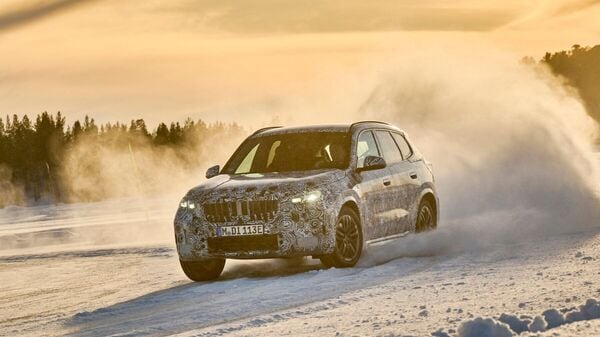 The all-electric BMW iX1 has entered the final winter testing phase at the winter testing centre in Arjeplog, northern Sweden. BMW stated this is the last testing phase before the BMW iX1 electric SUV enters the series production. The BMW iX1 which is based on fifth-generation BMW eDrive technology, in this testing, has been exposed to bitterly cold temperatures and tough winter conditions. This technology from the company enables the electric SUV smartly control heat to ensure short charging times and also give the user a long-range, even in extreme sub-zero temperatures.

BMW explained the snow-covered roads and areas of frozen lakes have been prepared specially for these testing programmes as it provides the team of engineers to hone the interplay of the motors, electric all-wheel-drive technology and suspension control systems at the longitudinal and lateral dynamic limits. The ice surfaces, in particular, provide appropriate conditions in which that help the company to explore in detail and optimise how the powertrain and chassis work together.

The BMW iX1 sports two electric motors, one at the front axle and the other at the rear. The power from these motors is coordinated precisely to optimise traction and dynamic performance. The electric vehicle's fast-acting near-actuator wheel slip limitation technology makes it well-equipped to provide assured progress over any terrain, stated BMW.

The all-electric BMW iX1 is the brand’s third SUV that will feature a fully electric drive system and this model will be added to the lineup immediately after the launch of the BMW X1, which is scheduled to hit the roads later this year. BMW mentioned that the fully electrically powered model will be based on a flexible vehicle architecture and will be produced on the same assembly line as the combustion-engined and plug-in hybrid variants. This upcoming electric SUV from BMW promises a range of 413 km to 438 km.