The new Toyota Hilux will use the same underpinnings as the much popular Fortuner SUV in India.Hilux will be the first model in the lifestyle pick-up segment to be launched by Toyota in India.
By : HT Auto Desk
| Updated on: 19 Jan 2022, 01:58 PM 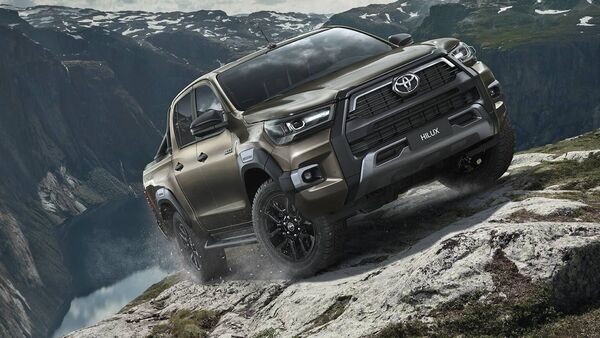 Toyota Kirloskar Motor (TKM) is all set to announce the launch of the new Hilux pick-up truck in the Indian market on Thursday. This will be the first model in the lifestyle pick-up segment to be launched by the Japanese automaker in India.

The new Toyota Hilux will use the same underpinnings as the much popular Fortuner SUV in India. The new pick-up truck is also expected to borrow elements from the facelifted Fortuner SUV which was introduced earlier in 2021.

On the outside, Hilux will use a dominating front fascia with muscular bumper. Its hexagonal-shaped grille will feature thick chrome borders, and down below silver colour skid plate will further contribute to its brawny appeal. There will also be LED projector headlamps with integrated DRLs to further add a modern touch. The profile will highlighted by its double-cab body style, vertically stacked tail lamps, and multi-spoke alloy wheels.

On the inside, expect the Hilux to feature a very Fortuner-inspired cabin space. The same was also recently teased in a short promotional video of the vehicle. Thus expect the Hilux to come forward with features such as climate control, a touchscreen infotainment system, leather upholstery, and a driver armrest with storage.

Under the hood, expect the new pick-up to source power from a 2.8-litre diesel engine. This engine will work along with optional manual and automatic transmissions, there will be also be an all-wheel-drive option.