Toyota cuts back February production plan by 20% amid chip crisis

Toyota will suspend some production at its Tahara plant, in Aichi Prefecture along with some other locations.
By : HT Auto Desk
| Updated on: 18 Jan 2022, 01:35 PM 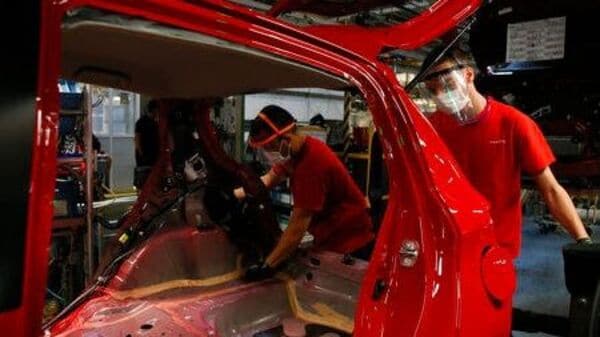 Toyota Motor Corp on Tuesday announced that is cutting its February production by around 20% due to a shortage of semiconductor chip, the Nikkei newspaper reported. However, the reduced output target of 700,000 units for the month is still up from the year-ago period when the company produced 668,001 units.

Toyota will suspend some production at its Tahara plant, in Aichi Prefecture along with some other locations, the report stated. The world’s top-selling automaker's 700,000-unit target for February is down 200,000 from its original goal for the month, the reported stated.

Toyota is still trying to ramp up production to make up for lost output last year during the peak of supply chain disruptions. The company continues to hold up its target of churning out 9 million vehicles for the fiscal year ending March. However, to meet this target, the company will have to produce a record one million cars in March.

While the target is set, the possibility of meeting it can be under high pressure as the pandemic-induced supply chain disruptions are proving persistent. Last year in mid-December, Japan’s auto parts trade group warned that a number of issues are impacting procurement of parts and materials including lingering production issues in Southeast Asia where Covid cases are once again on rise. The impact of this has been impairing the region’s output of semiconductors.

Earlier this month, Toyota suspend its operations at the joint-venture car manufacturing plant in Tianjin, as authorities have mandated mass testing to keep infections of the omicron variant under control. All the operations at the factory have been halted following the spread of Omicron in the region. The car manufacturing plant in Tianjin produces around half a million vehicles every year including passenger vehicles such as Corolla sean and Rav4 SUV.