HyperFighter Colossus from Canadian startup Damon Motors flies to 100 kmph in just three seconds but without any emission to worry about.
By : HT Auto Desk
| Updated on: 07 Jan 2022, 09:58 AM 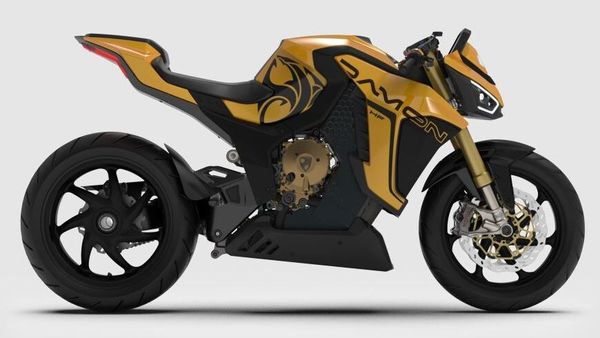 HyperFighter Colossus is built for speed but is powered by battery technology. (Image courtesy: Damon Motors)

Electric power is fast making its presence known and felt in the world of speed and anyone with an iota of doubt about the propulsion capabilities of a battery vis-a-vis a conventional engine has many examples to correct their opinions with. One such is the 2022 HyperFighter Colossus electric sports bike from Canadian startup Damon Motors that has caught the fancy of many at the ongoing CES 2022 in Las Vegas.

The HyperFighter Colossus doesn't just look as if it was built for speed but it actually has the capability leave rivals behind in a speed test. With a top speed of 273 kmph, the electric sports bike is clearly aiming to be a preferred option for those in need of an adrenaline rush minus the guilt of emissions.

Powering the ultra capable electric sports bike is a 20 kWh battery that enables it to travel 235 kms before needing a recharge. There is 200 hp for the taking and a sprint to 100 kmph takes all of three seconds.

With great speed capabilities comes the need for responsible riding and as such, the HyperFighter Colossus gets numerous radars, sensors and cams to provide a 360-degree advanced warning system for risks. “HyperFighter pays homage to the streetfighters of yesterday while looking to the future with unparalleled safety and performance that Damon is known around the world for," CTO Derek Dorresteyn was quoted as saying by Electrek. "We’ve built an incredible, technologically-advanced motorcycle that will appeal to both long-time streetfighter enthusiasts and new riders."

Of course, all of this comes at a rather steep price point. The HyperFighter Colossus has a sticker tag of $35,000 and pre-orders are open for customers in the US. But for anyone who isn't quite willing to spend big bucks on this model, there is good news. Damon Motors also plans two other models under the HyperFighter name. These models are likely to be less capable than Colossus and with fewer body kits. But the overall idea is to keep performance and safety as priority.