Yamaha Aerox 155 is basically a scooter that uses the tried and tested technology from YZF-R15.Aerox 155 gets a seat height of 790 mm which might not be good news for short-height riders.Yamaha Aerox 155 isn't a perfect scooter, but it is still the best by many standards.
By : Prashant Singh
| Updated on: 06 Dec 2021, 14:41 PM 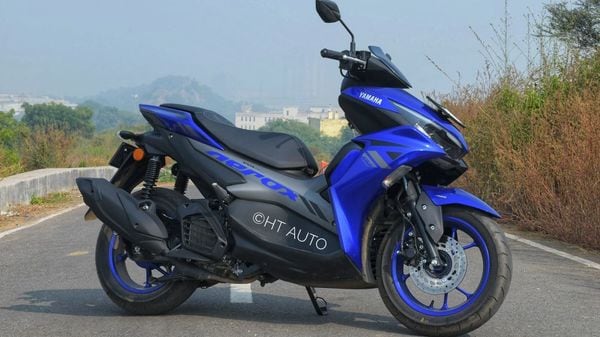 Yamaha Aerox 155 is basically a scooter that uses the tried and tested technology from YZF-R15.

The scooter market comprises a big chunk of the overall two-wheeler industry in India. Also, the ever-evolving buyer preferences and behaviour of Indian customers have made scooters more important for OEMs than ever. A recent shift has also been recorded in the entry-level segment that indicates that more buyers now plan to invest in scooters than bikes, of course, thanks to the varied options available.

While Yamaha still has a relatively tiny share in the Indian scooter market, its other Japanese counterpart has really cracked the code with its offerings. But Yamaha has shown in the past that its scooters (Fascino 125 and the RayZR 125) even though holding a small customer base, have proved to be very compelling propositions. Now, the company wants to raise the stakes higher, much higher with the Aerox 155. And it is doing something that has quite literally not ever been done before. Launching the Aerox 155 has been one of the boldest moves from the Japanese company, and I can only wonder how tricky this decision was to make internally. India being India, what comes first is “value" that consumers seek from a product but Aerox 155 isn't exactly promising to deliver strictly on the same terms. So what is it? Is it really what India needs? Read on to know! 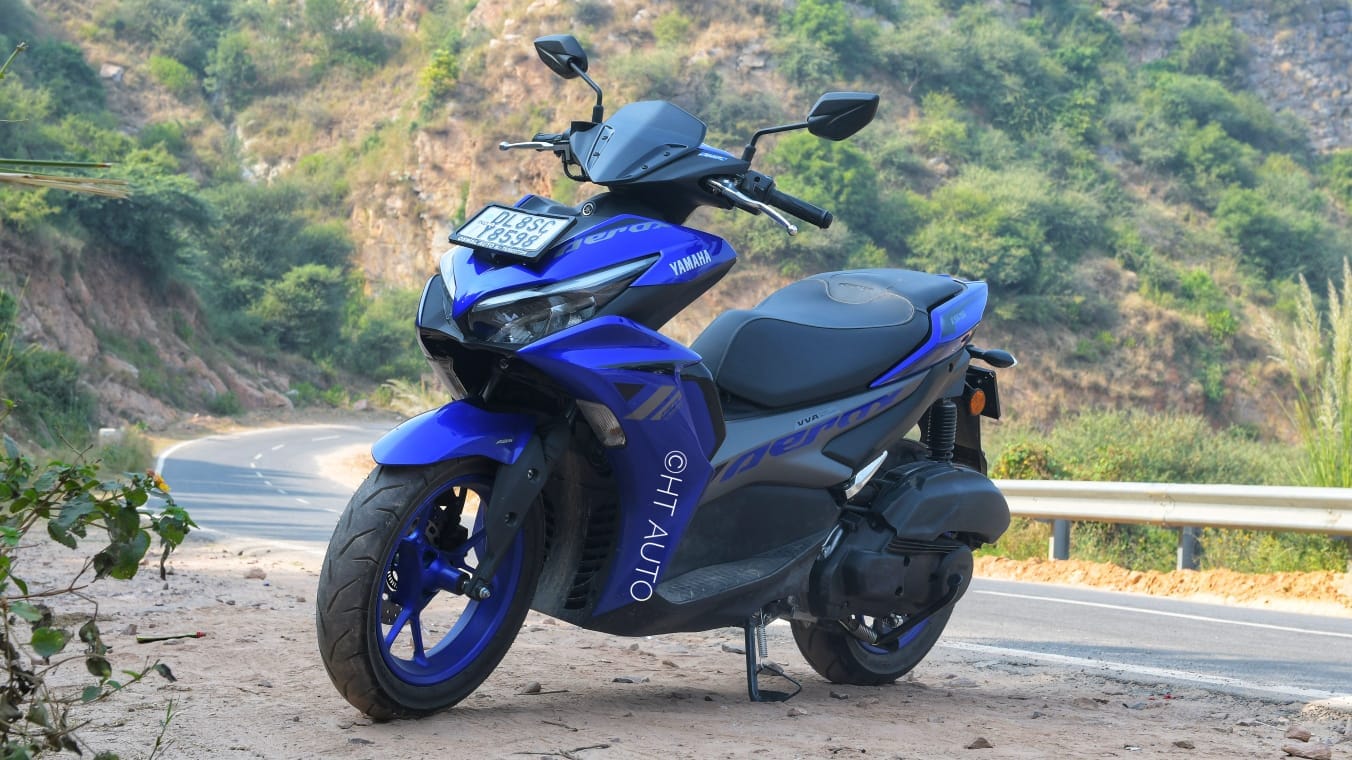 Launching the Aerox 155 has been one of the boldest moves from the Japanese company, and I can only wonder how tricky this decision was to make internally.

Aerox 155, a moto scooter, a moto-maxi scooter, or whatever you like to call it, is basically a scooter that uses the tried and tested platform and technology from the ultimate entry-level sports bike money can buy - the YZF-R15.

There are a number of unconventional bits on the scooter. For starters, the floorboard houses its fuel panel with a lid that can be unlocked using buttons near the key switch. There is also a secondary button in the same panel that unlocks the seat. There is a very tactile and high-quality feeling from these switches, also found on the switchgear added to the handlebar of the scooter. Another unconventional bit that can be highlighted is the addition of the radiator panel on the right side of the scooter, which in my opinion, looks cool. The Aerox gets radiator panel placed on the right side which looks unconventional and cool,

The seat, as mentioned can be unlocked using the button near the key switch. While there is adequate space to keep your regular paraphernalia, it simply can not accommodate a full-size rider helmet which is a big downer. But that is not it, the scooter also doesn't get a boot light or a USB socket (inside the boot) which is nowadays found on almost all kinds of scooters.

While the Aerox does get a fully digital anti-glare multifunction negative LCD that comes brimming with an array of information, seeing the kind of premium Yamaha is charging for this scooter. I would've been happier seeing a more modern, multi-coloured setup, but I'm only nitpicking here. The screen displays all the required info in a very legible and no-nonsense format, and the data remains visible even in bright daylight conditions.

The scooter gets a seat height of 790 mm which might not be good news for short-height riders. You need to be at least 5'4" or 5'5" to ride the scooter, also there isn't enough space on the floorboard to keep your foot comfortably. Another bit missing is the brake hold as the scooter rolls back while parked on a slope. While the rider seat on the Aerox appears to be wide and well-padded, there simply isn't enough space for the rider of medium size due to its stepped geometry. Also due to its slight slant geometry, the rider tends to slip forward when the scooter it stopped with a force. 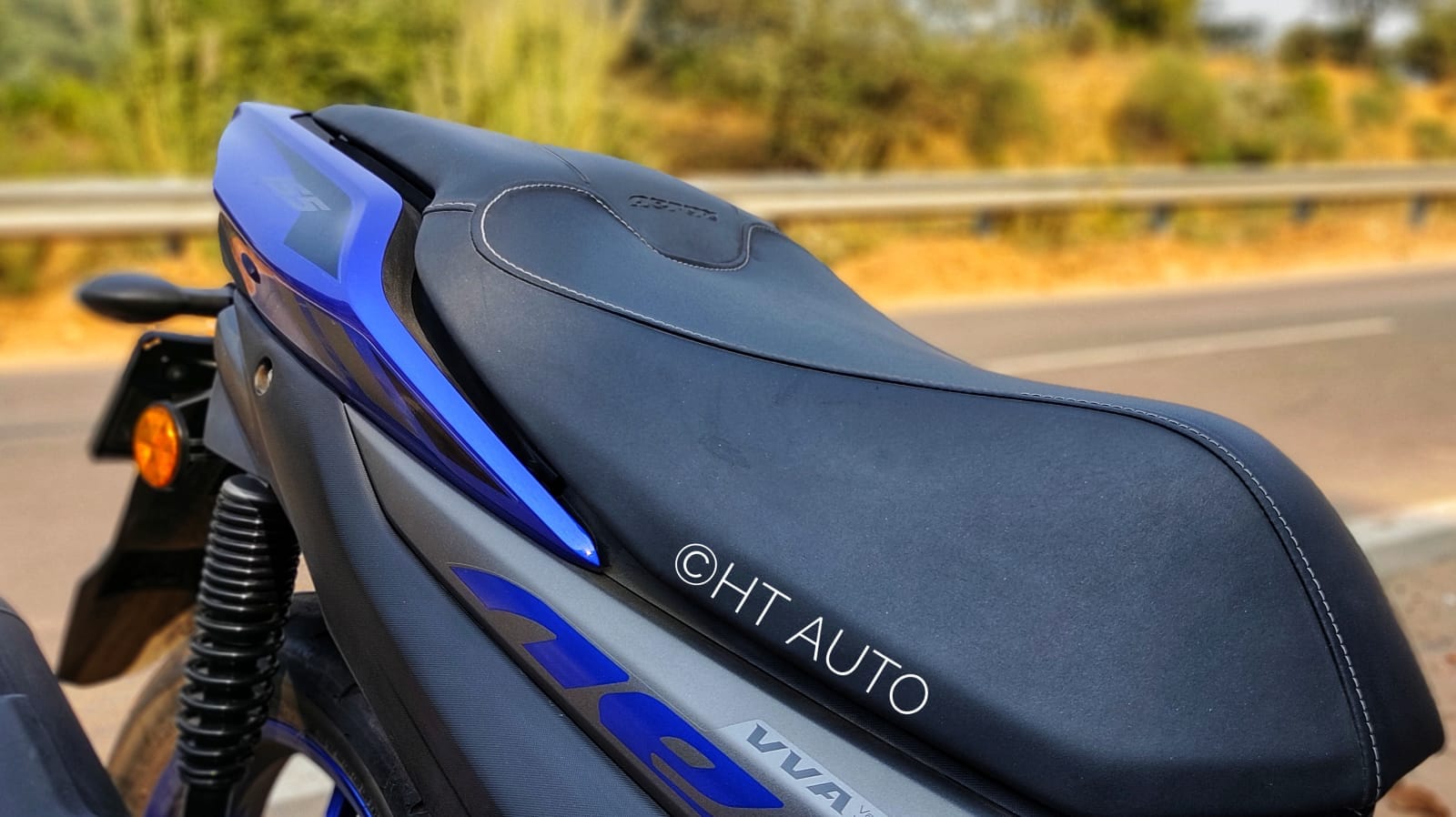 While the rider seat on the Aerox appears to be wide and well-padded, there simply isn't enough space for the rider of medium size due to its stepped geometry.

Why it is worth it:

While the scooter might be lacking in some basic features but just tap the stater on and I'll play the song ‘Nothing else matters’. Where the Aerox truly excels is its powertrain and the saddle experience it offers. The 155 cc liquid-cooled engine sourced from the R15 makes the Aerox seriously fast from the scooter standards. Crack the throttle open and it simply zooms away in no time. The 0-60 kmph is achieved lighting fast, and also attaining triple-digit speeds feels stupendously easy on the Aerox. All you need is to use the throttle halfway in and it crosses 100 kmph mark just like that. I didn't check the top speed thanks to our “safe" highways, but it is surprisingly fast on the highways, and also offers a very reassuring ride on fast speeds. 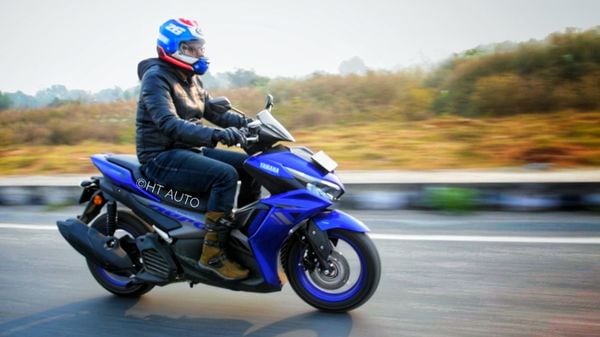 2022 Yamaha Aerox 155 scooter feels nimble around the corners and surprisingly stable on the highway speeds.

The Aerox not just feels surprisingly powerful, but it is also very refined and smooth even when cruising at highway speeds and that's what makes the Aerox a true delight to ride. Also, one of the best highlights includes its wheels which are larger than any other scooter found in the market. Speaking of which, it gets 14-inch wheels while the regular scooters only get nearly 10-inch or 11-inch wheels. If that's not it, the Aerox also uses an even longer wheelbase than most of the scooters, and even longer than the R15. This along with the large set of wheels give it a very stable ride on highway speeds. 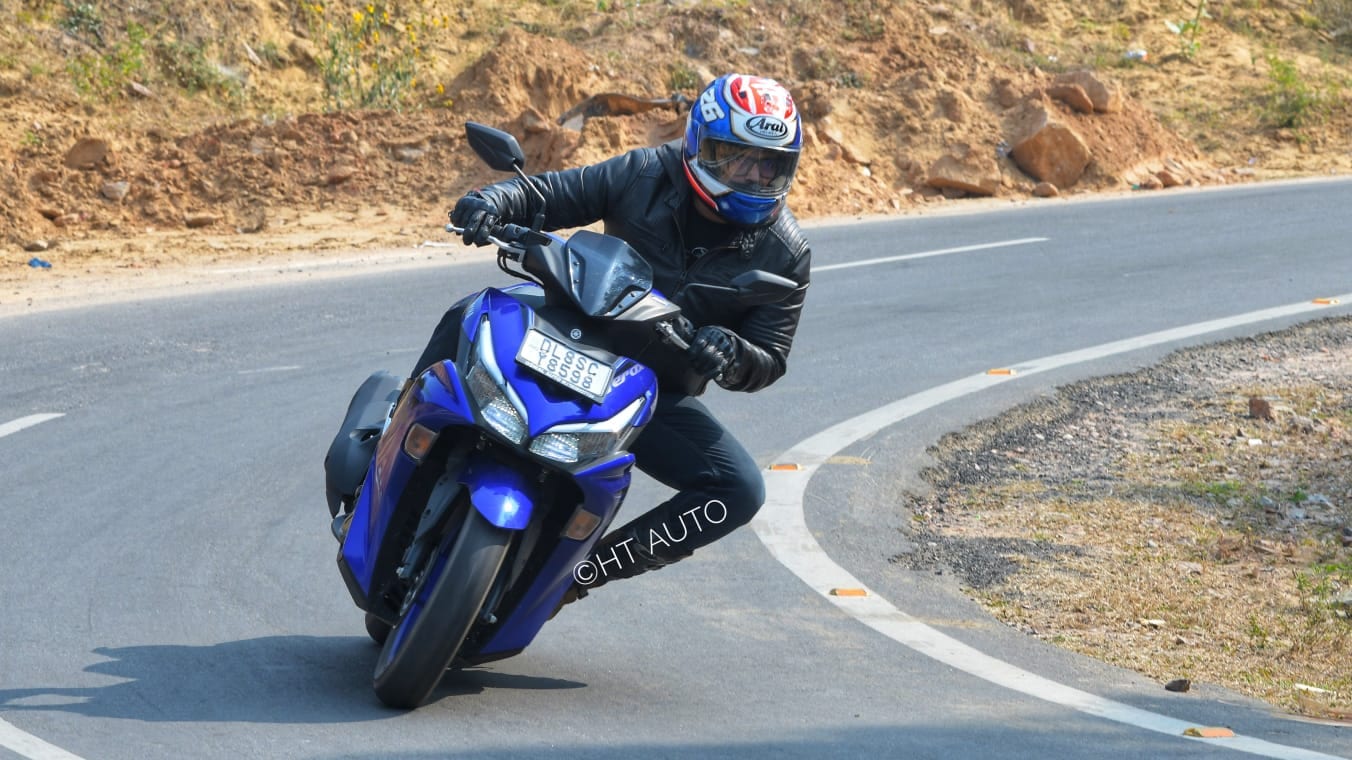 If you are experienced enough, even scraping your knee down around a corner on the Aerox won't be a surprise.

These wheels also come shod on with wide 110 mm front tyre, backed up with 140 mm rubber at the back. Even with a front as wide as 110 mm, its nose feels light and agile, and that's majorly because of the choice of the right rim size. The fat tyres not only give the scooter a very intimidating look but also keep it planted no matter how aggressively you ride it around the corners. If you are experienced enough, even scraping your knee down around a corner on the Aerox won't be a surprise.

For cutting speeds, it uses a 230mm front disc brake along with ABS, while at the rear sits a 130mm drum. The braking on the front is spot on, but you do need a bit of force on the rear lever for effective braking. 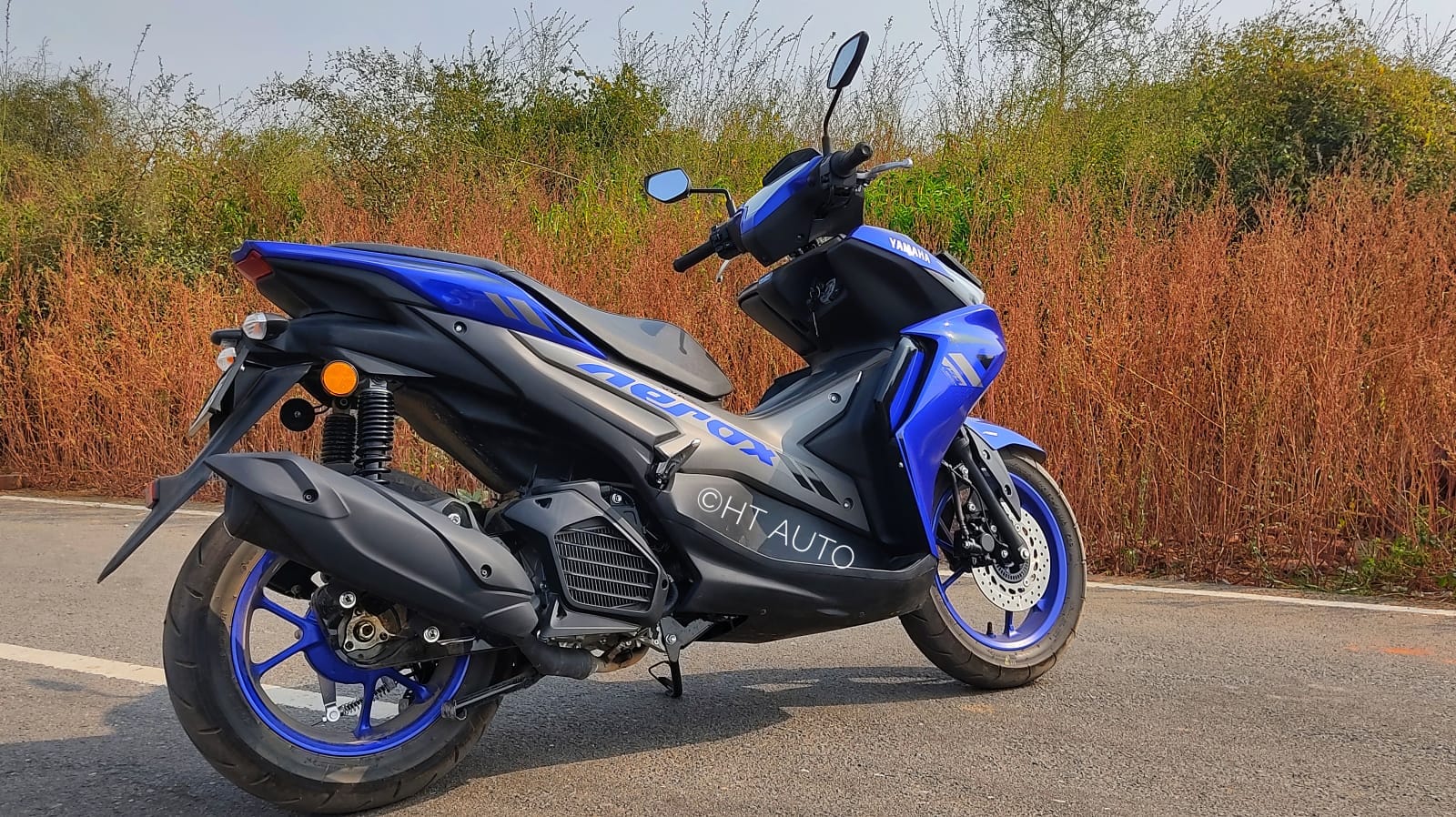 The wheels on the Aerox come shod on with a wide 110 mm front tyre, backed up with 140 mm rubber at the back. Even with a front as wide as 110 mm, its nose feels light and agile, and that's majorly because of the choice of the right rim size.

Yamaha Aerox 155 isn't a perfect scooter, it is not even close, but it is still the best among the two-wheelers offered in the Indian market currently that fit the description of being called a scooter. It definitely isn't for the traditional scooter-centric audience as it might not be the most convenient or practical scooter out there, but it is for the young at heart for whom all that matters is style, speed, and presence!