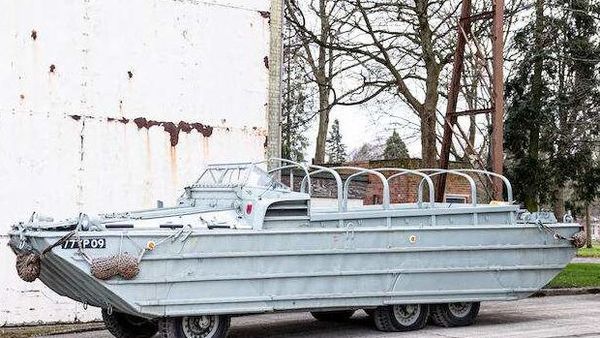 Say hello to GMC DUKW from 1943, a World War II era amphibious troop carrier that served the British armed forces back in time. This unique survivor vehicle has been put up for sale at Bonhams for an estimated price of $25,000 - 28,000.

The six-wheel drive truck was designed by General Motors in collaboration with yacht designer Rod Stephens, Jr of Sparkman & Stephens. The vehicle has served19 Amphibious Squadron of the Royal Corps of Transport and has been kept as a museum piece since the early 1970s.

It was used to land troops and cargo in coastal locations that did not have functional ports or did not support normal transport facility. Unfortunately, there is no record of the DUKW's wartime history but its story has been taken to masses through museums.

Though the vehicle has been consistently serviced and maintained by military engineers over the years, it will require some maintenance work before one can take it for a spin on the roads. The DUKW was kept in running condition during its stint at the Museum of Army Transport in Beverley, Yorkshire where it remained till 2003. But when it was moved from there, its fuel was drained and thus it will take some servicing to return to active service.

The vehicle comes with considerable history including a report on its original specifications and its Vehicle Data Card that details its movements and commissions. The GMC DUKW will be a unique possession that has many uses.