Tata concept Avinya EV is an ambitious case study and a solid showcase of what the future holds, both in terms of mobility as well as wellness in mobility.
By : Shubhodeep Chakravarty
| Updated on: 04 May 2022, 09:10 AM

Tata Avinya concept EV is a major show of intent from Tata Motors.

Tata Motors has been batting on the front foot when it comes to electric vehicles (EVs) but in recent times, the Indian automaker has been stepping out of the crease and hitting big with as many as two concept showcased to the country and the world. While Tata Curvv Concept was a spectacular show of intent when it comes to EV designing and its production version being prepped for a launch by 2024, the company also took the covers off of Tata Avinya EV concept, an even more ambitious project based on its new GEN 3 architecture.

What's in a concept?

Tata Motors has a lion's share in the Indian EV space for passenger vehicles. And while the electric car space may still be quite small here, the likes of Tata Nexon EV and Tata Tigor EV have been faring quite well. But while both models are here, Tata Motors appears determined to seal its leadership position in the times to come as well. As such, the likes of Curvv Concept and Avinya are solid statements of focused intent. Do both concepts look spectacular? Of course, most concepts tend to do. But designers over at Tata Motors say one of their major goals is to ensure production versions as close to the concepts as possible.

While Curvv Concept is an SUV, the Avinya is a crossover hatchback that seeks to marry the design cues of a hatchback with the versatility of an SUV and space and comfort of an MPV.

The Avinya EV has smaller proportions than Curvv but there is little doubting that it is indeed the more appealing of concepts showcased anywhere in the world in recent times. A large horizontal LED DRL on the front is one solid case in point. The entire lit light converges in the middle to form a ‘T’ to underline that this is indeed a Tata. The slim head light units further the overall emphasis on having a simple yet extremely artistic visual appeal. 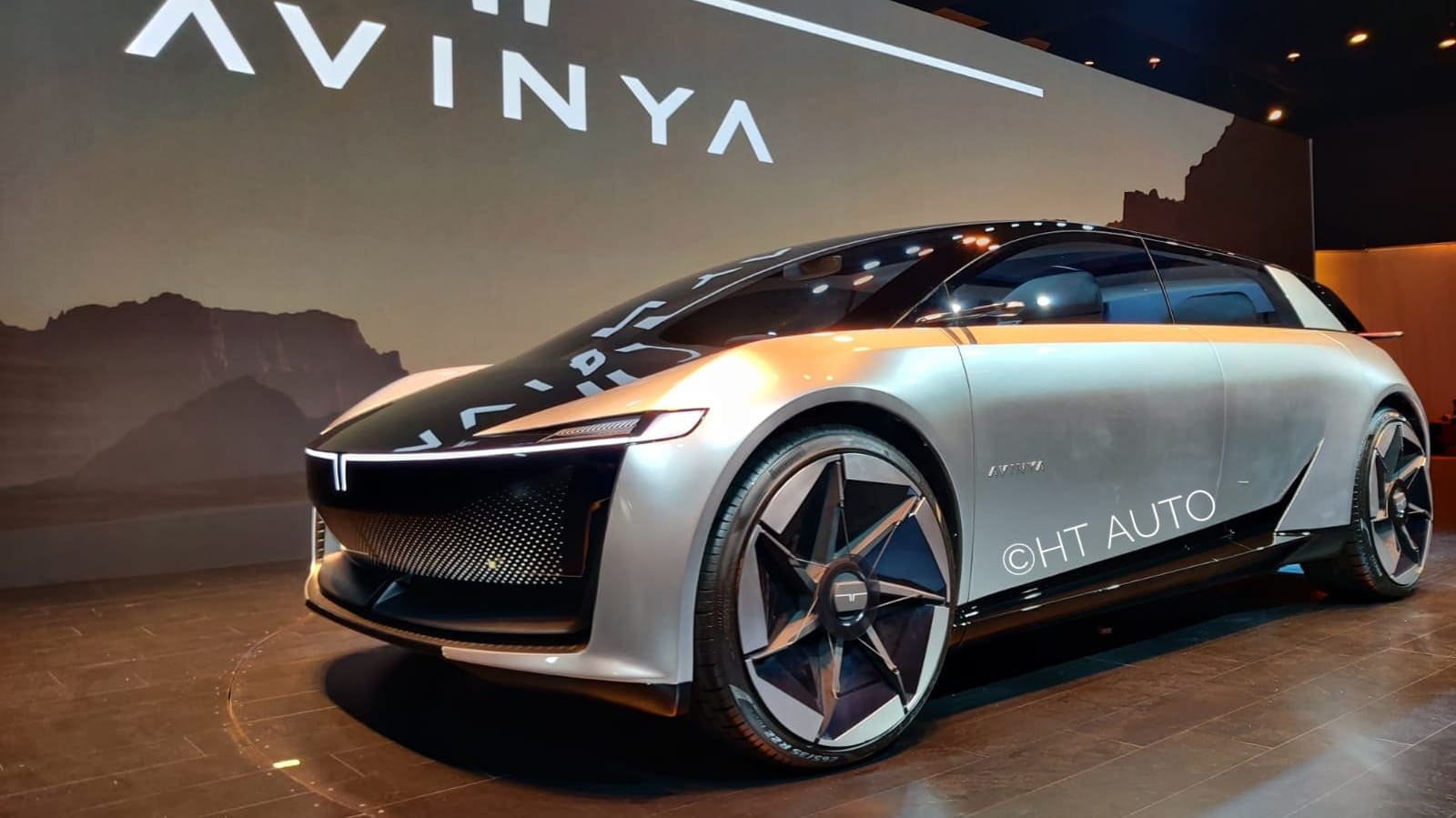 Avinya is based on a new Gen 3 platform which is built with lightweight materials and focuses on bringing down the overall mass of products based on it. This means that the Avinya may offer over 500 kms range in its production version.

Over at the side, the profile is focused on minimalism but the ‘Butterfly’ doors go over and beyond to evoke a wow from onlookers. There are no side mirrors and instead, a camera each on either side puts out the feed to the driver inside. And then there is the slightly stooping roofline to give the Avinya EV its hatchback credentials.

The design team at Tata Motors says the entire look of Avinya from the outside focuses on human centricity. What this also means is a deliberate decision to not have imposing screens inside.

At a time when car makers are going big and going bold with infotainment screens, Tata believes that future of EVs could well be about the experience of the drive itself and not distractions that screens may emerge to be. Besides, there is a belief that all touch-enables commands can be handled by voice commands which would negate the need for imposing screens. 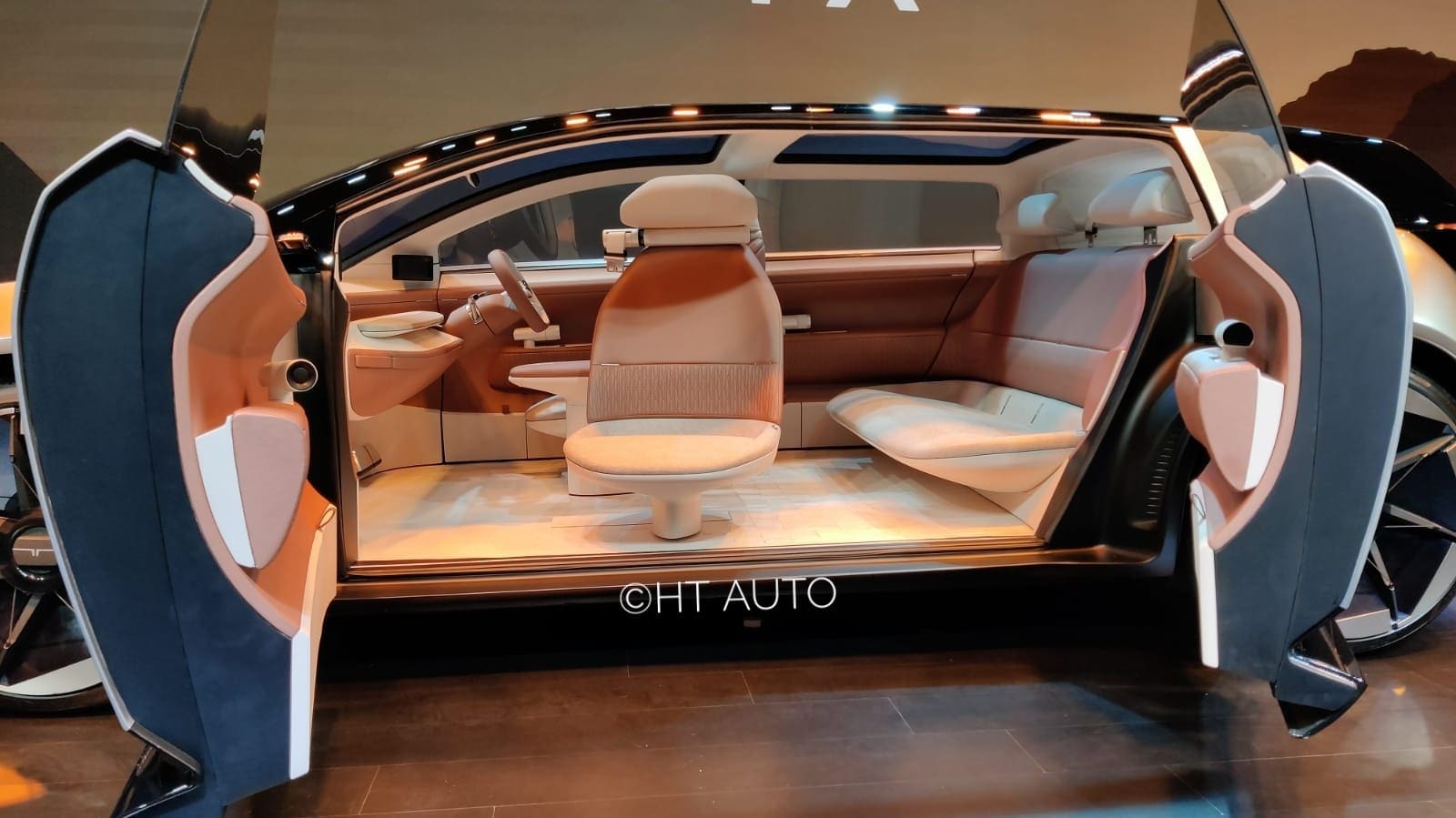 Wide door angles and swivel seats augment the pleasing feels emanating from the cabin of the Avinya concept.

As such, the Avinya Concept gets a thin screen bar across the dashboard, almost a line. The steering also gets a rather small high-resolution screen but that's all. The cabin overall continues to emphasize on a simplistic, welcoming aura with light shades used on the upholstery, dashboard and even the floorbed.

The front swivel seats are a take away from the Jetsons animated series while the rear seats are more a comfy couch than seats. The extended wheelbase means that there is miles and miles of leg room for occupants, whether on the front seat or the ones at the back.

As far as names go, these may inspire or may just be an end thought. So while ‘Curvv’ sought to put the spotlight on the curves on the concept model and may not have involved a whole lot of thought process, Avinya means innovation in Sanskrit and the name does do justice to the concept product.