Lexus RX SUV will now be offered with four new powertrains, including the first plug-in hybrid system to be equipped with the luxury SUV.
By : HT Auto Desk
| Updated on: 01 Jun 2022, 10:28 AM 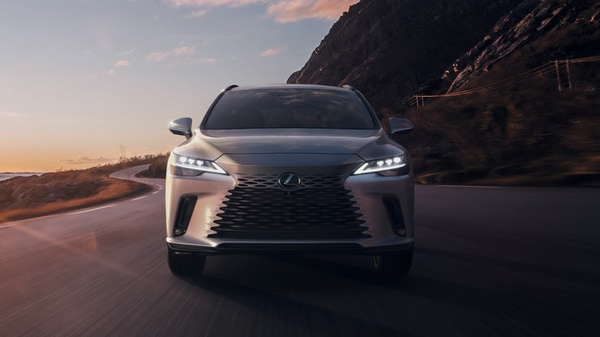 Lexus RX SUV will now be offered with four new powertrains, including a plug-in hybrid system.

Luxury carmaker Lexus has taken the covers off the new generation RX compact SUV for the global markets. The fifth generation Lexus RX will be offered on a new platform and with the choice of four new powertrains. The facelift version of the RX SUV has ditched the old V6 engines in its new avatar. It will take on the likes of the Mercedes-Benz GLE, BMW X5 or even the entry-level Porsche Cayenne.

The new Lexus RX is built on the newly restructured TNGA-K platform. Resulting in being more Rigid, but the overall weight of the car is reduced by 90 kg. In addition, the wheelbase has been extended by 60 mm in accordance with the increased wheel width. But compensate for the mobility of use by reducing the rear overhang distance by 60 mm.

The design of the RX facelift SUV remains largely the same as the outgoing version. It gets the similar Spindle Grille and a set of headlights that come with Daytime Running Light. The rear has a modern set of LED lights wrapped from right to left.

The interior of the new RX SUV is quite premium as expected. It comes with a 14-inch touchscreen infotainment system and digital driver display. The interior is available in six different colour themes which include Macadamia Brown, Black Black, Birch Beige, Palomino Yellow Gold, Peppercorn and Rioja Red.

The overall design of the new RX has not changed much from the original model. However, the biggest changes have come under the hood. There is a 2.4-litre DOHC 16-valve, 4-cylinder turbocharged petrol engine capable of generating maximum power of 275 horsepower and 430 Nm of peak torque. The engine comes mated to an 8-speed automatic transmission and will be available in both front-wheel drive and 4-wheel drive AWD.

The RX350h variant will come equipped with a 2.5-litre 4-cylinder Hybrid petrol engine which can churn out maximum power of 246 horsepower and peak torque of 316 Nm. The engine is mated to a CVT automatic transmission and 4-wheel drive AWD system.

The RX500 F Sport variant will be powered by a 2.4-litre 4-cylinder Hybrid petrol engine with turbocharged air system. It is capable of generating maximum power of 367 hp and maximum torque of 550 Nm. It will come paired with a 6-speed automatic transmission.

Lexus will also offer a plug-in hybrid variant of the RX SUV later.