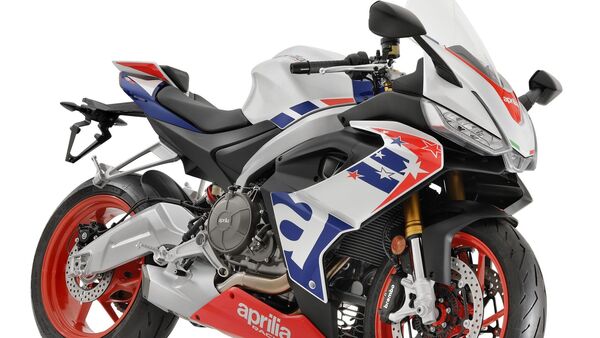 Aprilia RS660 has been introduced in a limited edition version which sports a new and exclusive paint job limited to just 1500 units globally. The newly introduced version of the model commemorates the company's success in AMA National Road Racing Championship. The new model comes with stars and stripes paint job with majorly white, red and blue colours.

Apart from the new paint theme, the motorcycle has received a gearbox with inverted shift patterns –push down for upshifts and push up for downshifts. This is basically found on all the proper race bikes. In addition to that, other key updates include the use of a bigger front fairing for better air flow and a rear seat cowl to make the exteriors more appealing.

Apart from this, the rest of the motorcycle remains more or less the same. It continues to feature the same 659cc liquid-cooled parallel-twin motor that is responsible for churning out 100bhp of maximum power at 10,5000 rpm and peak torque of 67Nm at 8500rpm. The transmission is a 6-speed unit. The motorcycle packs a range of features such as APRC (Aprilia Performance Ride Control), a six-axis IMU with three-level cornering ABS, traction control, adjustable wheelie control, engine brake control, and multiple riding modes.

The Aprilia RS660 was launched in the Indian market in August 2021 at ₹13.39 lakh (ex-showroom). It comes out as a direct rival to the likes of Honda CBR650R, Yamaha YZF-R7 and the upcoming Kawasaki Ninja 700R. The latter is reportedly under development. In the international market, the bike is available in three colour options namely Lava Red, Black Apex, and Acid Gold.