Global NCAP notes that S-Presso from Maruti Suzuki offers only driver airbag as standard and that its body shell has been rated unstable.Maruti maintains its cars are compliant with strict safety standards put in place by Government of India.
By : HT Auto Desk
| Updated on: 11 Nov 2020, 07:36 PM 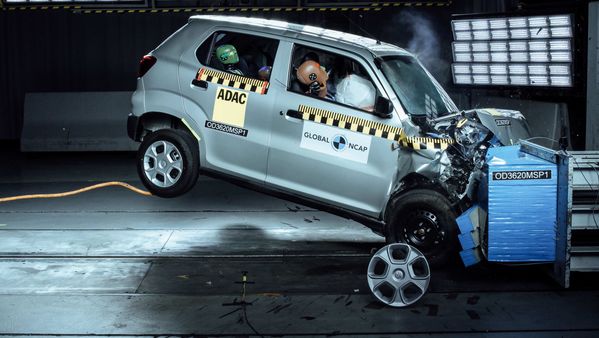 Image of an S-Presso during a crash test conducted by Global NCAP.

Maruti Suzuki S-Presso has failed to earn any stars in the latest round of safety ratings' test conducted by Global NCAP. The test was conducted on three 'Made-in-India' cars in controlled lab conditions with Hyundai Grand i10 securing two stars and Kia Seltos earning three. (Read report here)

S-Presso's performance in the crash tests is likely to put the spotlight on the safety on offer in the Maruti Suzuki car which has been a popular model due to reasons ranging from its micro-SUV proportions to a feature-rich cabin at an affordable price point.

S-Presso failed to impress when tested for adult occupant protection, primarily because it only gets a driver-side airbag as standard. Airbags and the protection they offer are an important part of how a car performs in the tests conducted by Global NCAP. As such, the dummies placed inside the S-Presso were found with significant impact to the neck and chest areas. "Driver’s chest showed poor protection and passenger’s chest showed weak protection. Driver’s knees showed marginal protection as they could impact with dangerous structures behind the dashboard supported by the Tranfascia tube while passenger’s knees showed good protection," the test report read.

The body shell of the vehicle and its footwell area was also deemed unstable.

The test results further noted that front seatbelts do not have pretensioners and the rear middle occupant does not get a three-point seatbelt. There is also no ISOFIX anchorages for the Child Restraint Systems (CRS).

As such, Global NCAP took a grim view of the safety on offer. "It is very disappointing that Maruti Suzuki, the manufacturer with the largest share of the Indian market, offers such low safety performance for Indian consumers," said Alejandro Furas, Secretary General of Global NCAP. "Surely it's time for Maruti Suzuki to demonstrate this commitment to safety for its customers."

HT Auto reached out to Maruti Suzuki for a reaction to the test results. A company spokesperson reiterated that all products on offer for the Indian buyer are compliant with the safety standards here. "Safety is a critical issue and is therefore closely regulated by governments around the world as they are responsible for the safety of the people in their countries. It cannot be left to the opinion of any self proclaimed party," he said. "The Government of India has recently increased the stringency of car crash test standards and made them identical to European standards. All products of the company are fully compliant with these global standards and duly tested and certified by the Government of India." (Read more here)

Maruti Suzuki first introduced S-Presso in the Indian market back in 2019 and it has found many takers in the entry-level passenger vehicle market. The car maker has previously highlighted that it is built on its HEARTECT platform and has as many as ten safety features which includes ABS with EBD, rear-parking assist sensor and dual airbags, albeit in upper variants.