Maruti Suzuki S-Presso failed to earn any safety stars in the Global NCAP tests.Maruti says all its cars meet the safety standards put out by Government of India.
By : HT Auto Desk
| Updated on: 11 Nov 2020, 19:36 PM 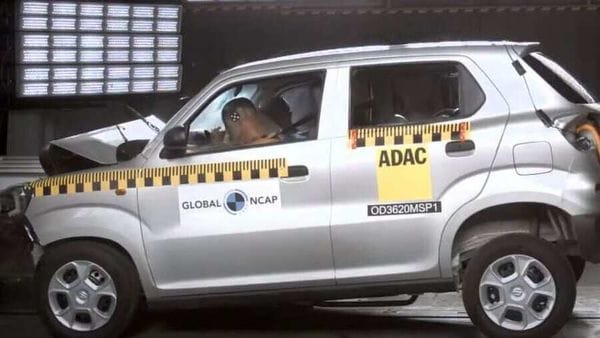 Screenshot from the video of the Global NCAP test on the S-Presso.

Maruti Suzuki S-Presso received no stars in a recent safety test conducted by Global NCAP which raised doubts about the protection offered to occupants inside this popular model from the car maker. Shortly after the results were announced though, the company reacted by underlining that all its cars, including S-Presso, comply with the safety standards spelt out by the Indian government and that these standards are at part with those in Europe.

The Global NCAP test on the S-Presso was conducted inside a controlled lab and on a base variant of the car which only gets driver-side airbag. The test result noted that the protection offered to adult and child occupants left much to be desired and deemed the structure of the vehicle to be unstable.

HT Auto reached out to Maruti Suzuki for its take on the test findings and a spokesperson reaffirmed the importance the company attaches to safety. "The Government of India has recently increased the stringency of car crash test standards and made them identical to European standards. All products of the company are fully compliant with these global standards and duly tested and certified by the Government of India," he said. "Safety is a critical issue and is therefore closely regulated by governments around the world as they are responsible for the safety of the people in their countries. It cannot be left to the opinion of any self proclaimed party."

The S-Presso, launched in 2019, is a popular offering from Maruti Suzuki and is considered a viable option by many, especially first-time car buyers. While the company says it has SUV-ish proportions, the vehicle may be actually faring well for the price point at which it is offered and the features it gets. The car recently completed a year in India and has found 75,000 takers.