Honda City eHEV is priced above the top-end petrol-only City variant and this is on expected lines because of the technology updates on the hybrid.
By : Shubhodeep Chakravarty
| Updated on: 04 May 2022, 12:23 PM 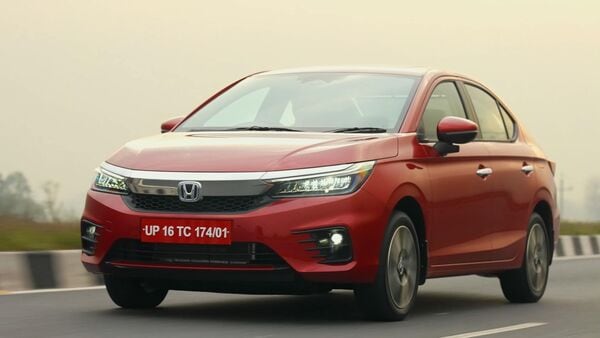 The only pure hybrid model in its segment, the Honda City e:HEV boasts of a mileage of around 26.5 kmpl.

Honda City Hybrid eHEV was officially launched in the Indian car market on Wednesday at ₹19.49 lakh (ex showroom). The Honda City hybrid is backing its cutting-edge technology to not only offer a claimed mileage figure of 26.5 kmpl but to also bring about a more spirited yet safer driving experience. The carmaker claims that its hybrid technology is the best in the world and that in current times of sky-high fuel prices, the Honda City Hybrid eHEV will offer a perfect balance between savings on fuel expenditure minus range anxieties that come with purely electric vehicles.

The Honda City has been a dominant player in the mid-size sedan segment in India, a space that has shrunk in recent times due to the growing preference for SUVs of all shapes and sizes. But Honda remains determined to keep its pole position with the City hybrid. “The New City e:HEV offers many firsts in the segment, in line with the legacy of Honda City – setting benchmarks for the industry with each introduction," said Takuya Tsumura, President and CEO, Honda Cars India, in a press statement issued by the company. “The tremendous response received on the unveil of the model last month reflects the acceptance of the strong hybrid technology in the mainstream segment."

While Honda hasn't revealed numbers pertaining to booking orders, company officials previously said there could be a waiting of several months for the model.This despite the fact that even the Honda City hybrid is being locally manufactured at the company plant in Rajasthan's Tapukara.

The City hybrid makes use of a two-Motor e-CVT hybrid system that is linked to a 1.5-litre Atkinson-Cycle DOHC i-VTEC petrol engine. There is also an Intelligent Power Unit (IPU) with advanced Lithium-ion Battery and an engine linked direct coupling clutch. While the hybrid sedan starts off on electric-only mode, it switches automatically to a hybrid mode as the speed builds. At high-speed cruising, it is the petrol engine alone that is at work.

The Honda City eHEV offers a combined power output of 126 Ps, torque of 253 Nm and yet claiming to go around 26.5 kms per litre of fuel.

While the City hybrid gets all four-wheel disc brakes, its main safety highlight is also one that's unique - Honda Sensing technology. Making use of a wide-view camera on the windshield, the hybrid version of City offers assistive functions such as Lane Keep Assist, Forward Collision Warning, Road Departure Mitigation, Adaptive Cruise Control and Collision Mitigation Braking.

The City hybrid looks almost identical to the conventional fifth-generation City barring certain updates like a more solid front grill, claw-like outline on the front fog lamps, trunk lip spoiler and rear bumper diffuser. The ‘H’ logo at the front and back are also now in a shade of Blue.

The City hybrid gets two-tone ivory and black interior colour theme and the upholstery is in premium leather. The eight-inch main display has been carried forward and so has the TFT which, however, puts out hybrid-related information. There are also paddle shifters behind the steering but are used to adjust the intensity of regenerative braking.