Ola will offer test rides of S1 and S1 Pro electric scooters to its customers from November 10 for the first time since its launch. The company recently announced that it has deferred final payment for the e-scooters till next month.
By : HT Auto Desk
| Written By : Sabyasachi Dasgupta
| Updated on: 27 Oct 2021, 01:13 PM 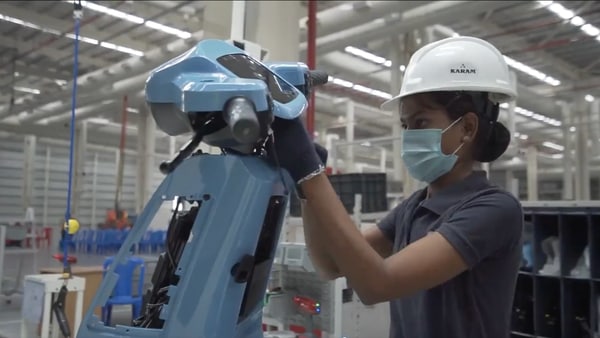 One of the Ola Electric employees seen at the EV maker's assembly line at its facility Futurefactory near Chennai, developing the S1 and S1 Pro electric scooters.

Ola Electric is gearing up to launch test rides for its S1 and S1 Pro electric scooters next month. It is also likely to start deliveries of the e-scooters from November. Ahead of that, Ola has shared a sneak peek into the EV maker's facility Futurefactory near Chennai, where it is manufacturing these scooters.

The video shows Ola's sprawling 500-acre Futurefactory, which has been developed in record time. Located near Chennai, the facility employs women-only workforce of around 10,000.

The first e-scooter came out of the factory within six months from the start of building of the phase one of the EV maker's plant. At full scale, it is expected to manufacture around 20 lakh electric scooters in the initial phase.

Ola will offer test rides of these electric scooters to its customers from November 10 for the first time since its launch. The company recently announced that it has deferred final payment for the S1 and S1 Pro e-scooters till next month.

The electric two-wheeler manufacturer had opened bookings for the e-scooters for two days in September at a nominal amount of ₹499. The booking were opened for two days from September 15. Ola Electric claimed it has already seen booking worth more than ₹1,100 crore in those two days.

Sneak peak of the scooters in production. The women at our Futurefactory are ramping up production fast! #JoinTheRevolution @OlaElectric pic.twitter.com/Z0eanudV8X

Ola also launched its first Hypercharger in India just a couple of days ago. Ola Electric's Hyperchargers will be capable of charging e-scooter batteries from 0 - 50% in just 18 minutes, making it fit for a half cycle range of 75 km. The company's website lists out a city-wise plan of charging network locations and the majority of Tier I and Tier II cities would be covered under its charging network. The Hypercharger stations will get a multilevel layout so as to support several customers simultaneously.