Ola Electric's Hyperchargers will be capable of charging e-scooter batteries from 0 - 50% in just 18 minutes.Ola Electric is all set initiate test rides of its S1 and S1 Pro electric scooters after Diwali.
By : HT Auto Desk
| Updated on: 24 Oct 2021, 10:22 AM 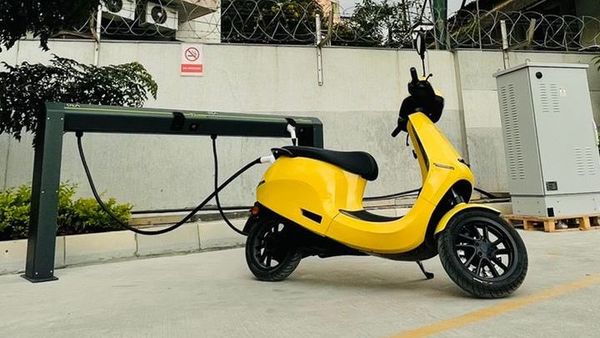 Ola Electric has announced the launch of its first Hypercharger for charging its electric S1 scooter ahead of the beginning of test rides on November 10. The EV company's CEO Bhavish Aggarwal took to Twitter to share the images of a Yellow S1 e-scooter being charged by its Hypercharger.

Aggarwal, in his Twitter post, wrote, “The first @OlaElectric Hypercharger goes live… charging up my S1 after the morning trip." The company had earlier announced that it will set up charging support for its customers under its 'Hypercharger' setup that will be installed in over 100,000 locations/touchpoints across 400 Indian cities.

Ola Electric's Hyperchargers will be capable of charging e-scooter batteries from 0 - 50% in just 18 minutes, making it fit for a half cycle range of 75 km. The company's website lists out a city-wise plan of charging network locations and the majority of Tier I and Tier II cities would be covered under its charging network. The Hypercharger stations will get a multilevel layout so as to support several customers simultaneously.

The first @OlaElectric Hypercharger goes live 🙂 charging up my S1 after the morning trip 👍🏼 pic.twitter.com/MZFOXgDDEK

The roll out of the first Hypercharger comes just days ahead of the beginning of the test rides for the Ola Electric S1 and S1 Pro scooters, both of which were launched on August 15. The company plans to begin deliveries of the e-scooters from next month as well.

The Ola S1 has been priced at ₹1 lakh (ex-showroom) and it has a claimed range of around 120 kms on single charge. It is available in 10 colour options, and sources power from an 8.5 kW electric motor paired with a 3.97 kWh battery pack. The S1 Pro electric scooter comes with more range of 180 kms on single charge, and has been priced at ₹1.30 lakh thanks to its larger batter pack. It comes with a top speed of 115 kmph.