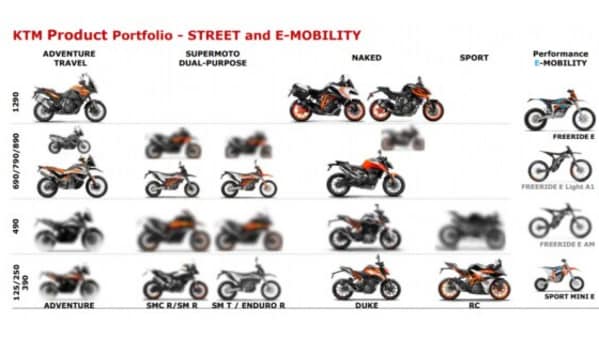 The KTM 490 range will share details with the CFMoto 450SR.

KTM’s 490 range has been under anticipation since the first reports came out back in 2019. And it looks like the range will finally see the light of day as early as 2022. As per a report by the German publication - Motorcycles.news, the much-awaited KTM 490 range will include models such as Duke, RC, Adventure, Supermoto, and Enduro. The arrival of the new 490 range will mean that the Austrian two-wheeler maker will stretch legs throughout the displacement ranging from 125 to 1290 cc through 390, 490, 790, and 890.

Additionally, the source report also mentions that the 490 range will share details with the 450cc parallel-twin motor-powered CFMoto 450SR, which could be the first result of the development of KTM’s 490 range. For those unaware of the past developments, CFMoto is the Chinese arm of the KTM Group, and the company will be borrowing the 450 cc architecture from 450SR for the upcoming KTM 490 range. This directly indicates that the KTM 490 will make use of a 270-degree crankshaft, similar to the 689cc twin Yamaha uses in several of its models.

The company is also considering a new RC 490 which should be able to compete with the likes of the twin-cylinder Ninja 400. While the company already has the RC390, it is more of a rival to Ninja 300 and the Yamaha YZF-R3 bikes. But it remains unconfirmed if the RC490 will come out as a replacement model for the existing RC390, or if both will continue to be sold alongside each other.

After the international debut, some select models from the new KTM 490 range are also likely to be introduced in the Indian market, sometime later in 2023.