A tweet reporting the incident was laced with sarcasm but backfired when no offense related to the accident could be found.
By : HT Auto Desk
| Updated on: 03 Jun 2020, 11:48 AM 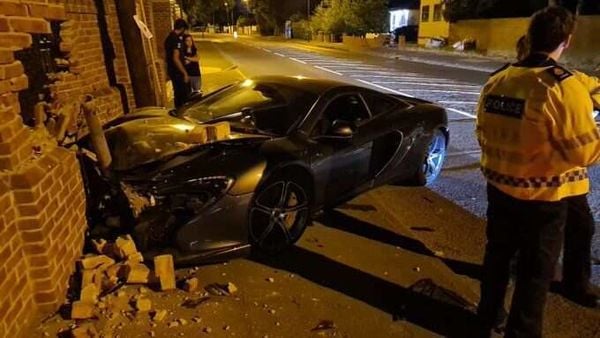 While it is important to highlight road accident cases in a bid to spread awareness and prevent injuries and fatalities in times to come, Surrey Police may have gone a tad too far in using sarcastic humour on Twitter to inform about a crashed McLaren estimated to be around £150,000.

The official Twitter handle of Road Policing Unit - Surrey Police had posted an image of a McLaren which had crashed into a brick wall and suffered extensive damage to its front parts. "Somehow the driver of this McLaren couldn't keep the car on the straight road in a 40 limit. Investigations continue," the accompanying text had read. When a user questioned the sarcastic tone of the text, the reply continued to persist with the sarcastic character.

Chertsey Lane near Staines. Somehow the driver of this McLaren couldn’t keep the car on the straight road in a 40 limit. 🤔🤔🤔🤔

It was later admitted by the cops that no offense had been identified pertaining to this particular car crash which made many question the tweet from earlier.

(Also ratch: Ferrari supercar worth £250,000 wrecked after collision with bus)

UK's MailOnline eventually reported that Chief Inspector Michael Hodder from Surrey and Sussex Roads Policing Unit had issued a statement in which he clarified the intention of officers was not to cause offense or undermine the severity of the accident. 'The team continually balances the need to raise awareness of road safety messages whilst being innovative in our messaging on social media," he was quoted as saying.

While the identity of the driver has either not been established or not yet revealed, the tweet mentioned above was still on the official Twitter handle at the time of filing this report.