The employee was reportedly unhappy with his boss and drove into his Ferrari out of anger and to get back at him.
By : HT Auto Desk
| Updated on: 11 May 2020, 07:37 PM 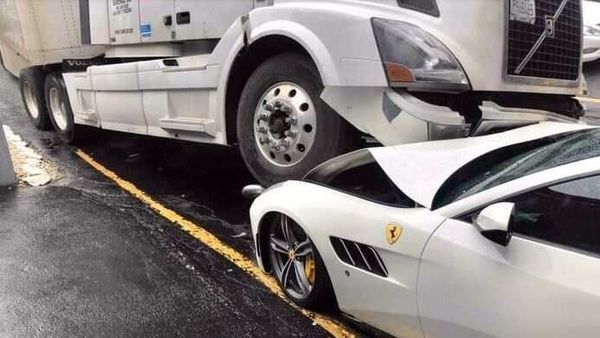 This image was shared by nemomilo

Photos of a Volvo semi-truck completely crushing the front of a swanky Ferrari GTC4Lusso has gone viral online and reports suggest that it was an act of revenge by a fuming employee who wanted to get back at his boss, the owner of the sportscar.

The photos doing the rounds of the internet show the white Volvo completely wrecking the bonnet of the sparkling white Ferrari to the point where it seems highly improbable that anything of the sportscar can be salvaged. These have gone viral online but netizens have been claiming different reasons as the cause of the employee's ire.

One account states that the driver of the truck had been sacked after he allegedly complained about having to take a drug test and for not getting a new truck. The employee, the claim goes on, then asked his boss if the Ferrari parked outside was his and when it was confirmed, got into his truck and rammed it.

Another Facebook post also confirms that the accused was furious because he was not given a new truck as had been apparently promised to him, prompting him to get into his existing truck and use it against the Ferrari. Others have also claimed that the poor performance of the accused had led to an altercation with his boss.

Whatever be the reason, the mangled Ferrari is quite a sorry sight even if the truck appears to have gotten away with just a broken bumper. It is highly likely that there would be mechanical troubles in the sportscar, which has a V12 engine at its heart and is raved for its sporty performance, could be rendered too expensive to be repaired.