Watch: Ferrari supercar worth £250,000 wrecked after collision with bus

Unconfirmed reports suggest the Ferrari had been rented by Swarmz who himself confirmed he was at the scene of the accident. It is not clear yet if he was driving or if he even was in the car at the time of the incident.
By : HT Auto Desk
| Updated on: 25 May 2020, 01:25 PM 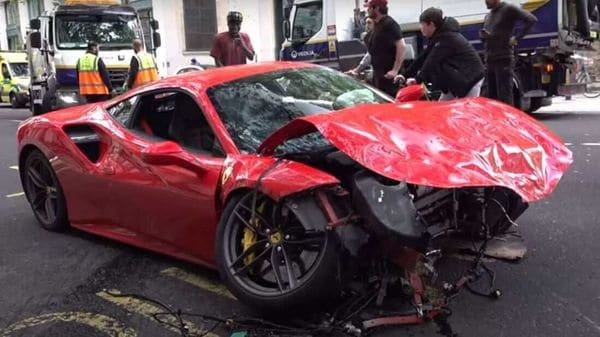 Screenshot taken from a video posted on Youtube by TheTFJJ

A gleaming Ferrari 488 Pista supercar worth £250,000 (approximately $ 300,000; ₹2.31 crore) was reduced to a crumpled wreck on the streets of London after it collided with a London public transportation bus.

The unfortunate accident reportedly took place near London's iconic Trafalgar Square and the supercar involved may have been rented by rapper Swarmz who posted an Instagram story which showed he was at the scene of the incident. It has not been confirmed, however, if he was driving the vehicle, was in the vehicle or if it even belonged to him. Unconfirmed reports on social media suggested that Swarmz had rented the Ferrari. He did not receive any injuries in the accident.

The same cannot be said about the car which had a completely crumpled front portion. The bonnet has been wrecked, the head lights had come off and the airbag from inside the steering wheel had also gone off. The right middle portion of the route 91 bus was also damaged.

That the accident took place in a 20 miles per hour speed limit zone has made many question how the vehicle could have been damaged in such a way if it was under this prescribed limit.

Emergency personnel rushed to the spot soon after the accident was reported and it took some time for the debris to be cleared from the road.

While it is unlikely that the supercar can be salvaged, the matter is under investigation and footage from cameras in the vicinity as well as eyewitness accounts are being examined.