Yet another lawsuit filed against Tesla highlights instances of racial abuse directed against employees of African-American origin.
By : HT Auto Desk
| Updated on: 05 Jul 2022, 08:55 AM 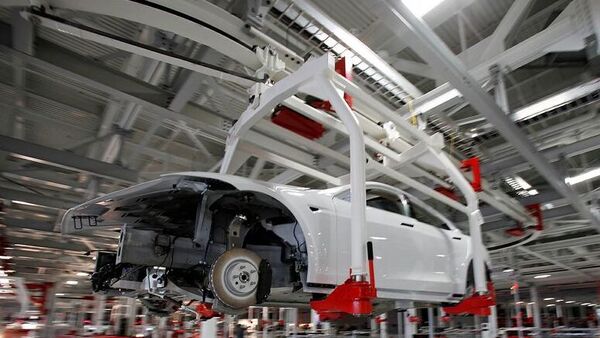 File photo: The body of a Tesla Model S is transported by an automated crane at the Tesla factory in Fremont, California.

Accusations of racial abuse against Tesla have been coming in at lightning speed with many present but mostly former employees accusing the electric vehicle-maker of inaction against those on factory floor indulging in racist comments and behavior. While Tesla was previously asked to pay $15 million to a former worker after he won his case - although he has refused the compensation amount, the company now faces a fresh lawsuit in California with over a dozen present and former employees making largely similar charges.

According to reports, the lawsuit filed in a California court highlights rampant racism and racist-related comments and beahviour, mostly on the Tesla factory floor in Fremont. The lawsuit alleges words like ‘slavery’, ‘plantation’ and even the ‘N’ word were commonly used against employees belonging to the African-American community. Additionally, comments laced with sexual connotation too were rather common, as per the lawsuit filing.

It has been further highlighted that some of the said employees were demoted after they took sanctioned leaves to recover from Covid-19.

The latest lawsuit is just one among as many as 10 filed against Tesla although the company led by Elon Musk has mostly denied most charges of any wrongdoing. But critics continue to slam Tesla and many call the company and Musk out for being profit and volume-oriented at the cost of people employed.

Tesla is the world's largest EV maker and leads the field of play by a significant margin. The company recently opened massive factory installations in Berlin and in Texas. But it also has very ambitious goals of selling 20 million EVs each year from 2030. This means getting production figures up by a significant number which, in turn, could mean mammoth pressure on workers in factories across the globe.