Brembo has decided to buy 2.43% stake in tyre maker Pirelli, held both directly and indirectly through its Nuova FourB parent company.
By : Reuters
| Updated on: 01 Apr 2020, 11:03 AM 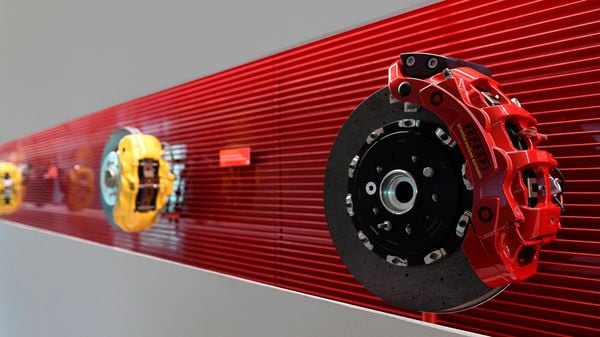 File photo: A braking system for Ferrari (R) is seen at Brembo headquarters in Bergamo, Italy.

Italy's Brembo, which make brakes for Ferrari, Tesla, BMW and Mercedes as well as several Formula One teams, has taken a small "long-term" stake in tyre maker Pirelli .

Brembo said on Tuesday it had decided to buy the 2.43% stake, held both directly and indirectly through its Nuova FourB parent company, with "a non-speculative, long-term approach" and it had made the move "autonomously".

Shares in Pirelli are trading close to their lowest level since the tyre maker went public again in 2017, two years after a delisting that followed a takeover by ChemChina.

A source close to the matter said Brembo bought the stake without informing Pirelli, whose shares are down by around 40% so far this year, or its shareholders.

Pirelli, whose tyres are used by Formula One racing teams and automakers such as BMW and Audi has repositioned itself to serve the premium market segment, which is also Brembo's focus.

Marco Tronchetti Provera, Pirelli's chief executive, said stake increases by existing shareholders and the arrival of new ones such as Brembo at time of depressed market valuations confirmed the tyremaking firm had done a good job in recent years, as well as its solidity.

"But the course of Pirelli's business will continue unchanged," he said.

Pirelli also said on Tuesday it had secured a new five-year, 800 million euro financing which it will use mainly to repay existing debt.

Brembo's Executive Deputy Chairman Matteo Tiraboschi last year said the brake maker, which has a market capitalisation of around 2.25 billion euros, was eyeing an acquisition target of "significant size", even as big as Brembo itself.

It approved a loyalty share scheme that allows its family owners to retain control, even if their stake falls below 50% after an acquisition.

Tiraboschi said in October that Brembo was looking at the auto sector for the acquisitions, as it aimed to complete the range of products it offered, while remaining "consistent" with what it was doing already.

Tiraboschi, however, never gave precise details about what regions Brembo was looking at for its M&A plans.

With a market capitalisation of 3.3 billion euros, Pirelli is controlled by ChemChina and Silk Road Fund, jointly holding about 45.5%, and Italy's Camfin, which holds about 10%.

Pirelli's top investors last year extended a shareholder agreement until 2023 and this month said they would raise their stakes by up to 1.5% each.