Mercedes EQS SUV pricing for global markets out. Here's why fans are surprised

The Mercedes-Benz EQS SUV is the third model series and the EV is based on the architecture that has been developed for electric vehicles.

Mercedes-Benz is expanding its EQ range of electric vehicles (EQ) at a lightning quick pace and the next big thing from the German camp is the EQS SUV. Showcased for the first time in April, the EQS SUV will stand at the very top of Mercedes' electric SUV lineup which also has - or will have - the likes of EQC, EQE (SUV version) and EQB. Production of the EQS SUV has commenced at the Tuscaloosa plant in Alabama and the official pricing has now been revealed with the starting price of $104,400.

While the SUV counterpart of Mercedes' sedan models tend to carry a higher price tag, it seems that the Germans have decided to play the pricing game in a different way for its electric models. This is because the base price of the EQS SUV is nearly same as the base price of the EQS sedan - $104,000. The top-of-the-line electric SUV is being made available in 450+, 450 4MATIC and 580 4MATIC variants. The pricing for the upper two variants in the US market is at $107,400 and $125,950. Then there are some exclusive trim levels as well which adds a few thousand to the final price.

Mercedes has always had a strong lineup of luxury sedan and SUV models and this is a strategy it is following for its EVs as well. The AMG EQS 53 sedan was recently launched in India and the EQS 580 will come in later this year. The EQS 580 would be locally-assembled. 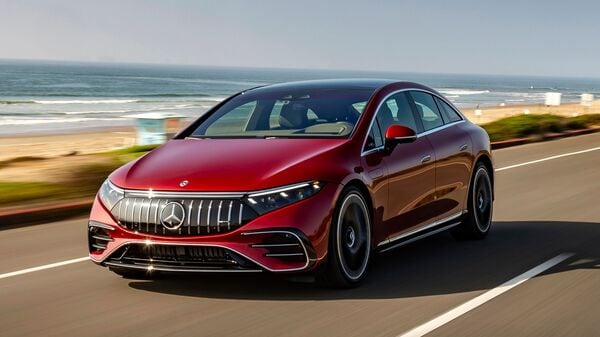 The AMG EQS 53 is touted as the fastest and most capable EV or electric vehicle from the Mercedes camp.

But while the Indian EV market may be only gradually growing, car makers are witnessing increased traction and acceptance in the US, China and select western European countries. The EQS SUV, for instance, would be the first electric vehicle from Mercedes to be manufactured in the US and would be exported to other markets from here subsequently. Globally, Mercedes has been selling more EVs than ever before. In Q2 of 2022, the company sold a total of 23,500 units of all electric vehicles, also called BEVs or Battery Electric Vehicles. This is a rise of around 90 per cent over figures from the same period a year ago. “The electric ramp up is gaining traction: Sales of our fully electric vehicles increased by more than 90% in Q2 and even 134% in the first half of 2022. It shows that we offer compelling electric vehicles that our customers desire," said Britta Seeger, Member of the Board of Management of Mercedes-Benz Group AG.