Some of the details seen in the prototype are unlikely to go into series production, like the absence of a central pillar and doors without upper frames.
By : HT Auto Desk
| Updated on: 18 Mar 2021, 04:32 PM 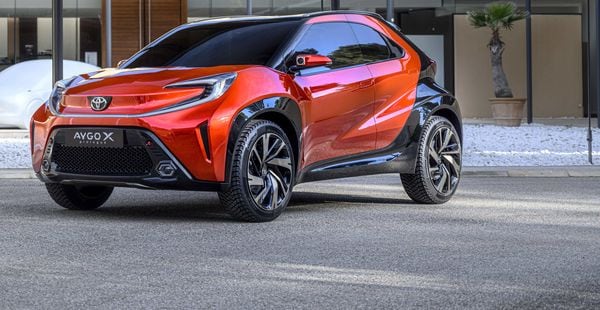 Toyota has showcased the third-generation Aygo, called the X Prologue, which is based on a smaller car from the company. The Aygo X Prologue will be based on the same TNGA-B platform used by Yaris Cross. The production model is likely be released in late 2021 or early 2022.

The concept car focuses on Aygo's bold new design with big wheels and thick fenders that make it look like a small crossover. The Aygo X Prologue has some interesting details. For example, the mirrors on both sides come with added 'action cameras' and Toyota says they are "perfect for capturing and sharing exploration moments."

At 3.7-metres long, the Aygo X Prologue is bigger, wider and taller than the current Aygo, but it is still smaller than the Yaris which stands at 3.95 metres. With a long and wide base the Aygo X Prologue has four wheels at the ends of the body, mudguards with bulky extensions and a very inclined rear pillar, to increase the interior space, details of which has not been shared yet.

The elements that define the SUV, or crossover, are all there, starting with what look like lower protections at the front and back, painted in black to highlight them, a tone that also appears in the fenders and the rear pillar.

Some of the details seen in the prototype are unlikely to go into series production, like the absence of a central pillar and doors without upper frames. Most likely, Toyota will adopt the same solution as the C-HR, with a central pillar painted in black and the rear door latches concealed in the rear pillar.

There is still no information on the technical specifications, but since the platform is the same that serves the Yaris and Yaris Cross, all engines that equip these models are likely to be available. Therefore the 1.5-litre engine that powers Yaris can be offered with the Augo X Prologue, possibly along with a hybrid version as well.