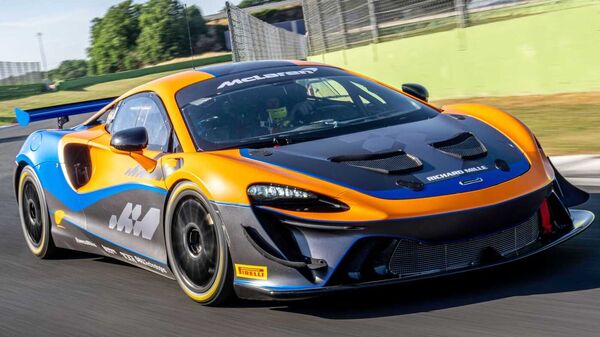 British supercar marquee McLaren has unveiled its Artura GT4 race car, which is the track-only variant of the Artura. The automaker has unveiled the car right ahead of its appearance at the Goodwood Festival of Speed. The race car is claimed to have shelved 130 kg weight compared to the street-legal version in order to comply with the GT4 regulations that don't allow hybrid powertrains.

The McLaren Artura comes weighing only 1,395 kg despite having the hybrid assist system. This comes as McLaren's strategy to keep weight down to a minimum in an attempt to maximize performance. Also, McLaren claims that the Artura GT4 comes more than 100 kg lightweight compared to the 570S GT4 it replaces. The Artiga GT4 will compete with the new BMW M4 GT4.

The powertrain of the McLaren Artura GT4 is another marvel, as the automaker claims. This car gets power from a V6 engine instead of a V8. This engine is paired with a seven-speed gearbox instead of an eight-speed transmission available in the standard street-legal Artura. The race car comes with shorter gear ratios compared to its predecessor along with a rear-mounted mechanical limited-slip differential. This strategy reduces brake wear at the back and keeps the fuel consumption down as well. Also, it enhances brake cooling efficiency.

The compact V6 motor not only reduces the weight of the car but also helps to generate enough power output to make the track-focused car competitive, claims McLaren. Removal of the battery pack fitted to the street-legal car is claimed to have made way for the 110-litre fuel cell and ancillary drive system. The automaker has cleverly repurposed the same space, which has kept the weight low and at the centre ensuring better balance during the high-speed runs.

In terms of aerodynamics, the race car comes as far more aggressive thanks to its aerodynamic kit, which enables it with greater downforce compared to the outgoing 570S GT4. McLaren claims to have added a bespoke front splitter and a new rear wing with seven levels of adjustability to fit various types of tracks. UIt comes with the same driver seat and adjustable pedals as the 720S GT3.