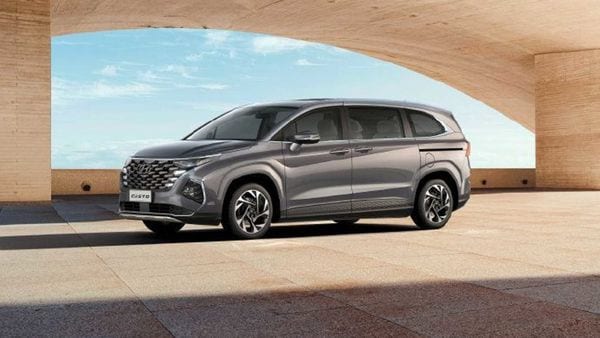 Hyundai has taken to the internet to reveal its upcoming MPV Custo. Set for global premiere later this month, the Hyundai Custo MPV looks like a bigger sibling of the recently launched Alcazar. Also, there are visual similarities with the Kia Carnival premium MPV.

Also Read: This Hyundai sedan continues to beat Hyundai SUVs in US sales chart for July

The car will be introduced to China first. The large MPV follows the same design as the contemporary Hyundai SUVs and MPVs. It gets a large and bold looking front grille that is identical to the Hyundai Alcazar's front grille. The sharp headlamps get LED projector units with LED daytime running lights disguised as chrome embellishments.

Moving to the side profile, the MPV looks muscular with its overall appearance. At the rear, it gets sleek LED taillights connected by a LED light bar. Both front and rear bumpers get faux skid plates. The sliding rear doors ensure spacious entry and exit for the occupants.

Dimensionally, Hyundai Custo measures 4,950 mm in length, 1,850 mm in width and 1,730 mm in height. It has a wheelbase of 3,006 mm. Interestingly, Custo isn’t as big as the new-generation Kia Carnival or even Hyundai Staria.

Inside the cabin, the Hyundai Custo gets a minimalistic appearance. It gets a simple dashboard layout with a slim digital instruments display and a 10.4-inch portrait-oriented touchscreen infotainment system. It also gets a twin-sunroof layout. The MPV would be available in six, seven and eight-seat configurations.

As Hyundai says, it will be available as a petrol-only offering in China. There will be two engines and two automatic transmissions on offer. One will be a 170 hp generating 1.5-litre T-GDI turbo-petrol engine paired with a 7-speed dual-clutch gearbox. The other engine will be a larger 236 hp generating 2.0-litre T-GDI turbo-petrol motor. It will be clubbed with an 8-speed automatic gearbox.