Bugatti informed that it has sold all the 500 units of Bugatti Chiron.Bugatti Chiron has created notable records for the company.
By : HT Auto Desk
| Updated on: 23 Jan 2022, 12:28 PM 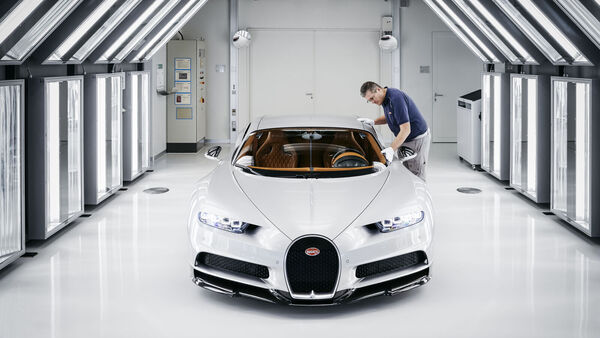 Bugatti Chiron was inspired by famous racing driver, Louis Chiron, who raced for Bugatti between 1926 and 1933.

Bugatti conveyed that with all 500 Bugatti Chirons sold out, the production of the model has entered its final production phase. The Molsheim automaker said Chiron was the company's effort to push the limits of Bugatti Veyron in terms of power output. It was inspired by famous racing driver, Louis Chiron, who raced for Bugatti between 1926 and 1933.

Bugatti produced the Veyron model from 2005 to 2015 and boasted a power output of 986 hp along with a top speed of over 400 kmph. Bugatti stated that Veyron is still considered one of the most advanced vehicles in the world. While developing Chiron, the company redesigned Veyron's 8.0-litre W16 engine with four turbochargers that helped the car to attain a massive power of 1479 hp with a peak torque of 1,600 Nm.

The hyper sports car can touch the speed of 100 kmph from stationary in just 2.4 seconds followed by 200 kmph in 6.1 seconds, and finally, 300 kmph in 13.1 seconds. Chiron sports a top speed of 420 kmph which is electronically limited. Bugatti shared it broke several world records with the Chiron. In 2017, Chiron zipped from zero to 400 kmph and back to zero again in 41.96 seconds setting a record-setting time followed by in 2019 when Bugatti set a new speed record of 490.484 kmph. This record remains until today, stated the automaker.

Christophe Piochon, Chief Operating Officer of Bugatti Rimac and President of Bugatti Automobiles said Chiron represents the best, most extraordinary vehicle in the world. “In every respect, it must excel – not just fast, but beautifully designed, constructed from the finest materials, usable in all conditions and at all times, and comfortable during long journeys. This is what makes the hyper sports car truly unique2," added Piochon.