Bugatti stated that last year 150 customers bought a Bugatti hyper sportscar of which, 60 per cent were completely new to the brand.Bugatti aims to deliver at least 80 vehicles this year.
By : HT Auto Desk
| Updated on: 14 Jan 2022, 11:51 AM 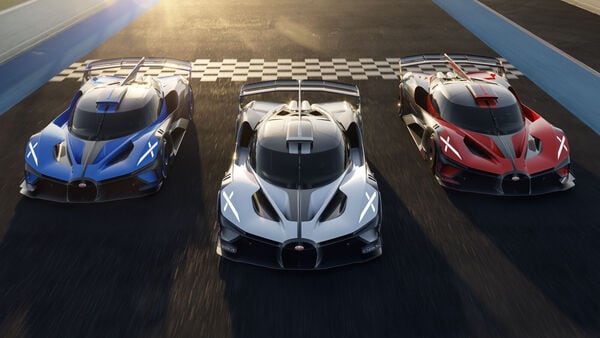 Bugatti announced its 2021 sales and stated that last year was the most successful year in the automaker's 112-year history. The Molsheim brand shared that 150 customers ordered a hyper sports car from the company and among this, 60 per cent were completely new to the brand. The automaker informed that Bugatti Chiron is sold out and the 40 units of the Bugatti Bolide, which the company claims to be the most extreme Bugatti ever, have also found owners.

The French marque delivered the Chiron Super Sport 300+ model as well as the one-off bespoke model, the La Voiture Noire whose price stands at $13.4 million last year. All the remaining units of Bugatti Divo were also delivered to the customers, informed Bugatti. The company also opened four new showrooms in Tokyo, Singapore, Riyadh and Manchester in 2021 for wider reach among potential customers.

Hendrik Malinowski, Managing Director of Sales and Marketing at Bugatti Automobiles, said that the brand thanks its customers who share its passion and have helped to make Bugatti what it is today. “Thanks to a hugely talented and motivated team, we improved our results for the fourth year in a row, and I would like to thank each and every member of the Bugatti team and the Bugatti Partners for their contribution to this incredible result," Malinowski added.

In 2022, Bugatti has aimed to deliver at least 80 vehicles. All the 10 units of Bugatti Centodieci will be finalised and delivered to its owners along with the brand's Chiron Super Sport.

The newly established joint company Bugatti Rimac with Rimac Automobili and Porsche is now gearing up to take the company to the next level under the guidance of the new CEO, Mate Rimac. “We believe what we have created with Bugatti Rimac is the best hypercar company in the world, blending over a century of heritage, craftsmanship and innovation with the quick-thinking, ingenious engineering and pioneering electrification technology of Rimac Automobili," added Rimac.