To break the speed barrier Bugatti had to push the overall engine output of Chiron Super Sport to 1600 PS.Bugatti also introduced several modifications such as new gear ratios, updated chassis, lighter rims, and new tyres in order to make the car faster and more stable at extreme speeds.
By : HT Auto Desk
| Updated on: 27 Nov 2021, 13:21 PM 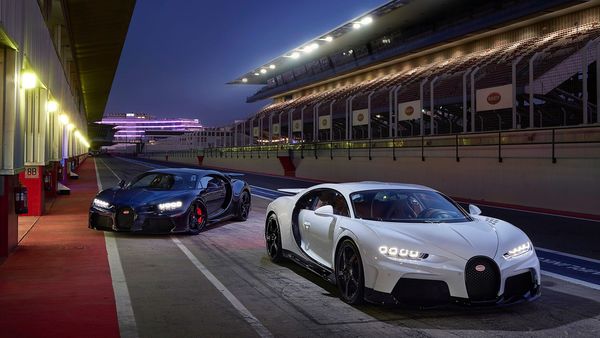 To break the speed barrier Bugatti also had to push the overall engine output higher to an overall 1600 PS.

Bugatti Chiron Super Sport 300+1 became the first-ever production car to break the 300-mph (482 kmph) barrier back in August 2019. The hyper sports car managed to cross 304.773 mph (490.484 km/h) precisely which made it the ‘fastest series production car’ in the world. So how did it manage to achieve that? Read on to know.

When it comes to achieving speeds as high as 400 kmph or above, increasing horsepower is simply isn't enough or else every Tom, Dick, and Harry would tune a JDM and install massive turbos to get the horses out, but power hike is just a part of the whole process that requires many fine tune modifications to the car’s body, engine, and chassis, to make the car achieve such extreme speeds safely and reliably.

One of the initial steps to cut down wind resistance at high speeds includes optimising the aerodynamics of the car and the company engineers and designers spent months to find the optimum aero balance for the Chiron Super Sport. Which helped them achieve the lowest drag coefficient and the maximum downforce. “Only perfect incoming airflow at the front of the car will keep harmful turbulence at bay and ensure that the airflow around the car stays clean," says Frank Heyl, Deputy Design Director at Bugatti.

To further cut the turbulence on the sides, the company engineers also installed newly developed air curtains to the car's front, similar to wings. This as per Bugatti, helps move the air around corners in an optimal way (without causing wind resistance).

Buggati also introduced more efficient turbocharges to the car for higher engine output. All four turbos were fitted with the bigger compressors that grew in size from 74 to 77 millimeters, to allow for higher throughput. “Despite the increase in performance, the weight of the engine is unaffected, and the response of the turbochargers remains at the same positive level provided by the 1,500 PS engine," says Andreas Kurowski, Engine Development Engineer at Bugatti.

The company also introduced several other modifications such as new gear ratios, updated chassis, lighter rims, and new tyres in order to make the car faster and more stable at extreme speeds.