Bolero Neo vs Venue vs Brezza vs Magnite vs Sonet vs Nexon: Spec comparison

Mahindra Bolero Neo is basically a rebranded version of the TUV300, with new features and specifications.All the SUVs listed in the comparison come with a plenty of creature comforts.The SUVs including the new Bolero Neo, Venue, Brezza and other measure under 4,000 mm in length.
By : HT Auto Desk
| Updated on: 17 Jul 2021, 10:21 AM 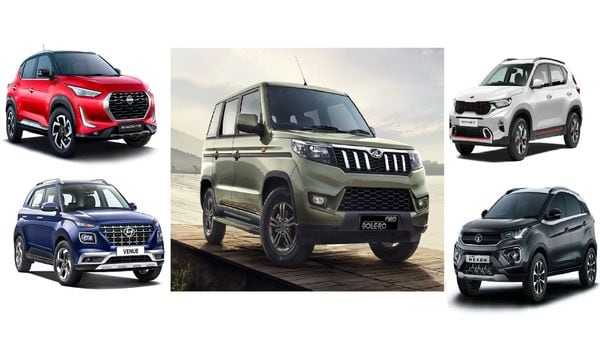 All the SUVs listed in the comparison come with a plenty of creature comforts.

Mahindra has recently announced the launch of the new Bolero Neo. It has been priced in the range of ₹8.48 - 9.99 Lakh (ex-showroom) and shares the segment with other compact SUVs including the Hyundai Venue, Maruti Vitara Brezza, Tata Nexon and more. It is basically a rebranded version of the TUV300, with new features and specifications. Here is how it compares with its rivals on paper.

The new Bolero Neo gets a mHawk1000 1493 cc B S 6-compliant engine that delivers 100 PS and 260Nm. The transmission option includes a 5-speed manual gearbox. In comparison, the Venue sources power from a 120 PS 1.0-litre engine that gets a range of transmission options - 6-speed manual / 6-speed iMT / 7-speed DCT. The Nexon also draws power from a similarly powered 1.2-litre petrol unit that also churns out 120 PS of maximum power and comes with transmission options of 6-speed MT / 6-speed AMT. That said, other segment cars such as Magnite, Brezza and Sonet get a 1.0-litre turbo, 1.5-litre and 1.2-litre engines, respectively.

It should be noted that only the petrol-powered engines have been taken into account.

All the SUVs listed in the comparison above come with a plenty of creature comforts and the most common among all include a touchscreen infotainment system, climate control, cruise control, and keyless entry with push button start/stop.

The only SUVs in comparison that gets wireless charging include Kia Sonet, and Hyundai Venue. They are also the select SUVs in the lineup beside the Sonet and Ecosport to feature ambient lighting and traction control system.

The newly launched Mahindra Bolero Neo is basically a rebranded version of the TUV300 and hence shares similar dimensions as well. It spans 3995mm in length, 1795mm in width, and 1817mm in height. Since it stands in the subcompact SUV segment, all its rivals are placed under the 4000mm length.

The Nissan Magnite measures 3,994mm in length, 1,758mm in width, and 1,572mm in height, while its wheelbase is rated at 2,500mm. Other Other SUVs in the class including Venue, Brezza, Nexon and Sonet all measure 3,995mm in length.