The Bajaj CT110X is a rival to the likes of the new Hero HF100 commuter bike which was launched recently.Both the bikes feature similar basic equipment and features such as telescopic forks, single set, alloy wheels and drum brakes.
By : HT Auto Desk
| Updated on: 16 Apr 2021, 05:01 PM 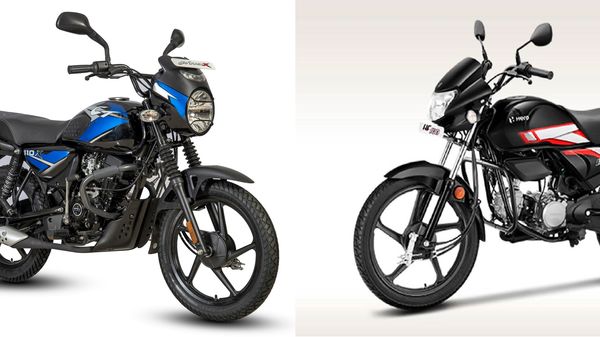 Both the commuter bikes feature similar basic equipment and features.

Bajaj Auto recently launched the new CT110X commuter motorcycle in the market. It is the top-end variant of the CT portfolio that gets a slew of additional features and styling bits over the lower variants. It is priced at ₹55,494 (Ex-showroom – Delhi) and has been made available in four colour options.

The CT110X is a rival to the likes of the new Hero HF100 commuter bike which was also launched recently. The HF100 has been priced at ₹49,400 (ex-showroom, Delhi) and is available in only a single colour option.

Some of the key features on the Bajaj's commuter include a wide tank, thick crash guard, child foothold, dual texture and dual stitched premium seats. The motorcycle also comes equipped with a rear carrier that has been designed to carry 7 kg of weight.

On the other hand, the HF100 comes with alloy wheels, single-seat, kick start and drum brakes. In fact, both the bikes feature drum brakes and none get disc brakes feature. Both also carry the same suspension setup that includes a telescopic front fork and twin shock absorber unit.