World's first flying taxi hub is getting ready in Coventry

Urban-Air Port which is building the Coverty flying taxi hub also aims to build around 200 hubs over the next five years and plans to offer five different designs.
By : HT Auto Desk
| Updated on: 14 May 2022, 01:17 PM 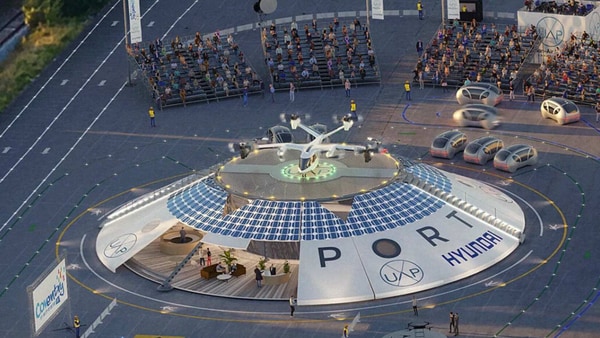 File photo of the flying car airport to come up in Coventry, England.

Coventry situated in England's Midlands will be the first-ever fully functional hub for flying taxis with its electric-powered vertical takeoff and landing ground. As per a report by Bloomberg, the site is fully functional sans the flying taxis themselves. A London-based startup that is developing the hub, Urban-Air Port Ltd shared with the site getting into shape, it is a matter of time before the first flying taxis come to market in a few years’ time.

The Coventry site has been designed as a doughnut which the startup shared will be the most efficient in the city settings. The site will feature a central helicopter-style landing pad surrounded by an outer ring housing check-in facilities, a pre-departure lounge and a cafe.

The entire set-up is 46 m in width so that these can fit crowded city centres easily in the future. The dimensions have been kept at a restricted scale also because the time between a passenger arriving and boarding a flight is intended to be just 20 minutes. Hence this will require a minimal waiting area, compared to a busy cabstand than an airport security queue. There will be charging points for electric cars and scooters surrounding the hub to allow passengers to switch seamlessly from one mode of travel to another.

Urban-Air Port founder and executive chairman Ricky Sandhu shared the company aims to bring the picture of future mobility to the forefront. “There’s no point having new technology if people don’t believe in it" Sandhu was quoted in the report. Urban-Air Port aims to build around 200 hubs over the next five years and plans to offer five different designs such as the Air One passenger base one similar to the Coventry; a floating Marine One version; Resilience One, which can be quickly assembled to provide disaster relief; City Box, for cargo carriage; and Docks Box, designed to attach to loading bays at warehouses and logistics centres.