Remember Scooby-Doo? Its Mystery Machine van is on sale 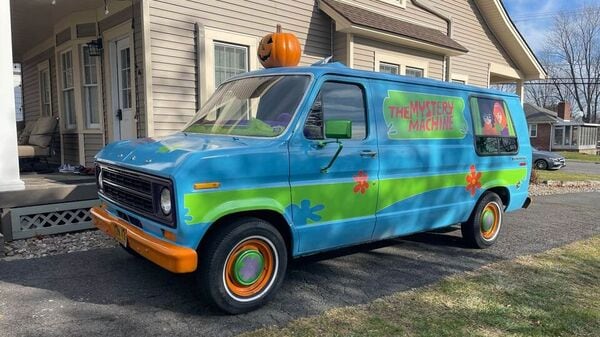 The Mystery machine is a transformed 1978 Ford Econoline.

If you are a 90's kid and have been an ardent follower of Cartoon Network in your childhood, you will be familiar with the call “Scooby Dooby Doo! Where are you?" A gang of teenagers accompanied by a Great Dane driving in a van called Mystery Machine to bust criminals with corrupt agendas disguised as ghosts. A van inspired by the animated vehicle created in Walden, New York is up for grasp. The price of the van has been kept at $11,500.

The exterior of the van exhibits the original colour combination of a blue-and-green colour scheme with orange flowers as the original animated van. The wheels also sport flower motifs at the centre. To make the model funkier, the owner has painted Velma and Daphne on the large, driver's side window along with Shaggy and Scooby-Doo at the back doors and Fred on the left side. A modelled pumpkin that was on the roof of the van, has been removed by the maker.

Also read | This electric Batmobile Tumbler is a Batman's green ride, could be yours

Coming to the interior, there is a green shag carpet on the floor echoing the theme outer colours. It also has a fuzzy purple upholstery for the seats and dashboard along with an orange couch with purple trim for the passengers. There is also a bed at the back of the van with a green mattress, purple pillow and a Scooby-Doo blanket. The maker has also decorated the inside with framed comic books as well as posters on the walls and the base of the bed.  There is also a rug with cartoon characters.

The van is originally a 1978 Ford Econoline. It derives its power from an inline-six engine that runs through a four-speed manual gearbox. The owner of the vehicle has informed the van can run smoothly up to 105 km without any issue. The individual has driven the vehicle 3,219 km in the last few months, said a report by Motor1.