Home Auto Cars News This Electric Batmobile Tumbler Replica Is Batman's Green Ride, Could Be Yours

This electric Batmobile Tumbler replica is Batman's green ride, could be yours 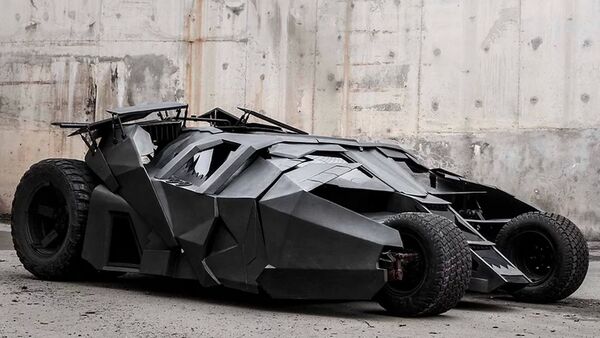 The electric Batmobile is capable of running at a top speed of 105 kmph. (Image: Classic Car Curation)

The Tumbler from Dark Knight trilogy is arguably the craziest looking Batmobile ever made. This menacingly monstrous vehicle has inspired many people to build replicas that stand out in the crowd with ample distinctiveness. The latest addition to this list is a fully electric Tumbler and it is available for purchase as well.

The car has been built by an artist named Nguyen Dan Chung, owner of the Macro Studios cosplay company known for creating superhero costumes. Nguyen assembled a team of designers, architects, mechanics and engineers to make the fully operational electric Batmobile replica. Initially, he built the Batmobile replica with an internal combustion engine (ICE), but later he decided to give it a more sustainable electric powertrain

The electric Batmobile replica's body has been built with ABS, composite, steel, and carbon fibre panels. The vehicle is built on a steel tubular frame. Some parts of the vehicle were handcrafted while others were 3D-printed in an attempt to make them closely resemble the original model. The vehicle runs on 13-inch rims wrapped in 22-inch tyres at the front, while the rear gets 18-inch rims wrapped in massive 33-inch tyres.

Dimensionally, the all-electric Batmobile measures 3,700 mm in length, making it a compact one. It gets a width of 2,400 mm, which could result in difficulty parking the vehicle. The vehicle measures 1,300 mm in height.

Visually, the pure electric Tumbler appears identical to the car tha6t was used in the movie. However, this one comes with slightly smaller wheels. It also gets a faux exhaust and there are some minor differences in the intakes and aero components as well. Overall, the electric Tumbler looks like a menacing and futuristic battle tank but sans any monstrous conventional powertrain.

Getting inside the electric Tumbler appears to be a hurdle. It comes with hydraulic doors that open automatically via remote control. The cockpit gets a room for the driver and one passenger. It gets monitors giving a Batman-like vibe. The windows are small and hence, it comes with huge blind spots. However, to solve that problem, it gets four cameras fitted to the exterior allowing a nearly 360-degree view of the surrounding.

Interestingly, the electric Tumbler weighs less than 600 kg. Being such a lightweight vehicle, it is beneficial for the Tumbler to have an electric powertrain, though the massive tyres at the back are not ideal for its electric range. The manufacturer has not revealed details about its lithium-ion battery and electric powertrain, but it is capable of running at a top speed of 105 kmph.

Vietnam-based automotive gallery Van Daryl is offering this pure electric Batmobile to the customers, but its pricing is yet to be disclosed. However, the prospective buyers can place an inquiry for the vehicle.