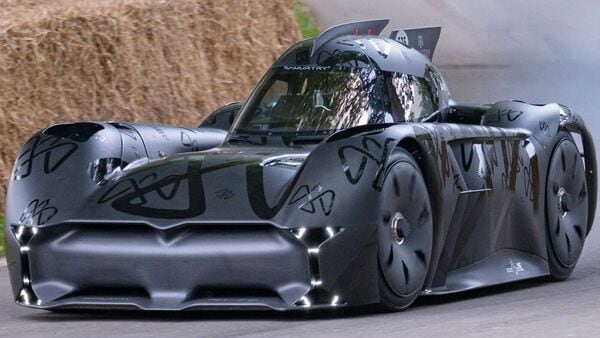 McMurtry Spéirling EV at the Goodwood Festival of Speed.

British electric vehicle brand McMurtry Automotive is ready to surprise the world with its midget Batmobile, which will appear at the Goodwood Festival of Speed. Besides an eye-catching design, this tiny EV claims to accelerate 0-97 kmph in just 1.5 seconds, which makes it surprisingly fast, even quicker than Bugatti Chiron. Christened McMurtry Spéirling, this tiny EV already made its Goodwood debut in 2021 and now, it aims to set an overall record at the event.

The EV company has revealed that former Formula One driver Max Chilton led the development process of the Spéirling EV. This pure electric track car comes with a single-seat configuration. It gets twin fans that pull air from under the car, bolstering instant downforce-on-demand, which is double its own weight, rated at around 2,000 kg. This results in the car having more downforce than a Formula One car running at 241 kmph.

Currently, Volkswagen ID. R holds the record at the hill climb event. It sprinted at 39.9 seconds beating its own record from the previous year. McMurtry Spéirling EV is aiming to beat that.

Thomas Yates, managing director of McMurtry Automotive, said that the company aims to win the event and he feels that the record is within reach if everything aligns for them. "Of course, this is motorsport and you can never take anything for granted but we are turning up with a highly competitive package. The last time a fan car competed in motorsport was when Niki Lauda dominated the 1978 Swedish Formula One Grand Prix," he further added.