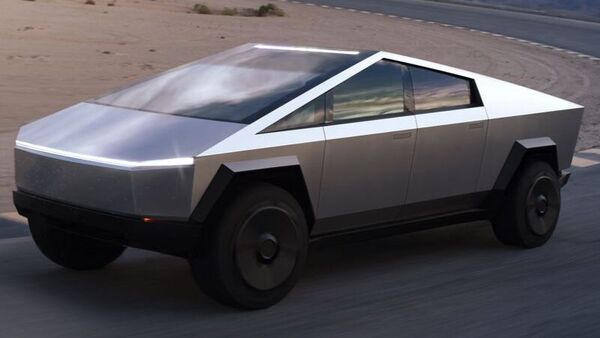 Tesla Cybertruck is one of the most awaited electric vehicle.

Tesla CEO Elon Musk in November 2019 said that it would make a lot of sense to make a smaller Cybertruck and it seems the EV major is ready with a compact version of the most awaited electric pickup truck. Street Insider reports that Tesla is readying a smaller Cybertruck that would break cover in March 2022. The automaker has scheduled its earning call later this month, but that event is unlikely to leak anything about the reported smaller Cybertruck variant.

The report also claims that the electric vehicle manufacturer might reveal both versions of Cybertruck during the special event in March this year. It further says that both the Cybertrucks would come with significant design and size differences.

The smaller Cybertruck would come with a body that would be around 20 per cent smaller than its bigger sibling, claims the report. With several automakers working on smaller electric pickup trucks, a smaller Tesla Cybertruck might be true.

This report comes at a time when Tesla is receiving flak for delaying the Cybertruck launch again and again. The latest Reuters report has stated that Tesla will not start selling the Cybertruck electric pickup truck before early 2023, with its production likely to commence around the end of this year.

Reuters said that Tesla has postponed the Cybertruck for a long period to make major changes to its design. The move comes after witnessing rival automakers introducing their respective electric pickup trucks with attractive designs and impressive specifications and features.